Muslim Families in India Say They Were Tricked Into Becoming Hindus With Promises of Food and Schooling December 26, 2014 Terry Firma

[M]ore than 50 impoverished Muslim families in a slum in the northern Indian city of Agra attended a simple but controversial ceremony at which they were asked by a Hindu priest to chant and throw offerings into the holy fire in front of some Hindu idols. The priest then welcomed the Muslims into the Hindu fold.

Some Muslims in the neighborhood of trash collectors told local reporters that it was all a fraud. They said that a Hindu activist had assured them that by attending the ceremony, they will get the government’s coveted “below-poverty-line” identity card and access to state welfare assistance in health and education. 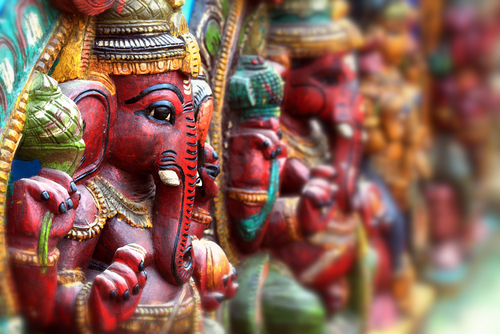 Bajrang Dal, the organizers of the ceremony and a radical Hindu group associated with Prime Minister’s Narendra Modi’s party, said that the ceremony was held in the open and the religious conversion was voluntary.

Initially, factions within Prime Minister Narendra Modi‘s Bharatiya Janata Party were so stoked by the contested conversion of the Muslim families in Agra that

[One] lawmaker subsequently announced plans for an even bigger Hindu conversion event of Christians and Muslims on Christmas Day in the northern town of Aligarh. It was later called off by Hindu groups. Critics say Hindu hardline groups have become more emboldened since the BJP was elected, stoking religious tensions.

An editorial in the Daily Times puts it starkly:

Extremism it seems has not afflicted Muslims only. In fact it has come to influence nearly every religious group. The strains of religious fundamentalism have been growing across the world. Even a religion like Buddhism adopted ruthless means to promote and maintain its religious identity in Sri Lanka and Myanmar. In Mali, fundamentalists destroyed the ancient desert city of Timbuktu, much as the Taliban did to the giant Buddhas of Bamiyan in Afghanistan. India too is passing through a similar phase where the dominant discourse revolves around establishing a Hindu narrative.

A pox on all their houses.