The Duggar family will not shut up about how much they hate LGBT people, but they’re not brave enough to admit it.

While guest-hosting a program put on by the anti-LGBT Family Research Council, Pastor Richard Land spoke with Josh Duggar (below), one of TLC’s “19 Kids and Counting” darlings and now an FRC employee. 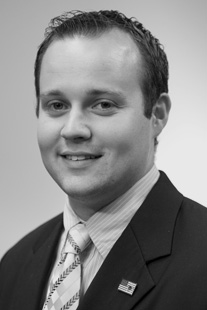 Duggar and his family recently spearheaded a movement to overturn a nondiscrimination bill in Fayetteville, Arkansas, which would have protected LGBT people from discrimination in employment, housing and public affairs. Since before the measure was even introduced, his family has served as the face of the anti-equality movement in Arkansas, perhaps best characterized by a robocall from matriarch Michelle Duggar comparing transgender people to sexual predators.

Duggar: …The other side is very vocal right now and they’re very clear on what their agenda is, the fact that they want to silence people who disagree with them. We have to stand up in love and say, ‘You know, we’re gonna stand up for what’s right, and we believe in this.’ I have so many people that I know who are gay or that lifestyle, but we have to go out there, we have to show them that kind of love and respect that they deserve as human beings. But we also have to stand up for our religious conscience rights and making certain that people are protected and that they have their voice as well, preserved. And I think that’s the balance we’re always striking, is to make sure — and I know, I was a small business owner for a number of years, and I was in the car business, I sold cars to people who didn’t have the same opinions and beliefs as I did, and that never became an issue. But when they’re trying to say you have to agree with someone, I think that’s the greatest challenge is saying this is not about, you have to agree with someone in order to do business with them. That is not the case, ever.

Land: If you read the radical gay groups, their goal is very clear. Their goal is to use the power of the state to force everyone to accept and affirm their lifestyle and to marginalize anyone who disagrees with it to the level of being the social outcast equivalent to a Klansman. And the only way they can get away with that is to do nothing. So I want to give an “attaboy” and “attagirl” to all the people in Fayetteville who stood up and defended their rights. And now, Joshua, as the executive director of Family Research Council Action, I assume you’re seeing this kind of grassroots pushback all across the country.

Duggar: We are. We know that the people’s voice ultimately is what matters. What we’re seeing right now is a lot of distortion out there. I’m reminded of a quote from Rick Warren, actually, of all people, and he says our culture has two huge lies. The first is that if you disagree with someone’s lifestyle, you must fear or hate them. The second is that to love someone means you must agree with everything they believe or do. Both are nonsense. You don’t have to compromise convictions to be compassionate. And I think grassroots people are realizing that, and they’re saying, ‘You know what, we still love everyone as Christ commands us to, we still have compassion, we still have those kinds of feelings, but we also have our convictions, and we have our beliefs,’ and at the core of that, that’s what makes America great, is that fact that we have dissenting opinions, and we’re going to go out there and go to the ballot box and stand up for what we believe.

Land: Well that’s right, and you know, if you really love somebody, you’re going to tell them the truth as you understand the truth. That’s why people in your family will tell you stuff that people outside won’t tell you. Because they love you. And they tell you the truth. And we need to speak the truth and love, and the Bible’s not neutral about lifestyles. The Bible approves and blesses some lifestyles and doesn’t approve and doesn’t bless others.

For a family man, Duggar seems to have a warped idea of what love looks like. Let’s rephrase what he’s saying more honestly:

“I want you to get fired for something you can’t control because I love you.”

“I think you deserve to be harassed every time you use a public restroom because I love you.”

“I believe you and your partner should get kicked out of your apartment because I love you.”

“I would be okay if you were banned from visiting your dying partner in the hospital because I love you.”

“I don’t mind if you and your children are legal strangers because I love you.”

It’s time to stop masquerading blatant hatred and disgust as “love” and “concern.” This kind of rhetoric trickles down into families and communities who have been led to believe that harassing, harming and abandoning their LGBT children are ways of displaying “love.” If you’re going to spread this kind of bigotry, at the very least own up to it.

December 27, 2014 That's One Way to Use the Bible Against Jesus
Browse Our Archives
What Are Your Thoughts?leave a comment