While we’re having a discussion about Nativity scenes on government property in Indiana, it seems like a good time to talk about State Senator Jim Smith (R): 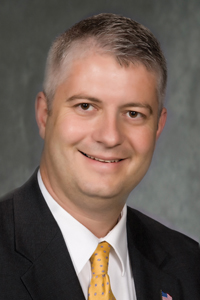 Last year, Smith tried passing a “Merry Christmas” bill that would allow people to celebrate Christmas. Because, you know, we’re in the middle of a war:

Sen. Jim Smith, R-Charlestown, proposed a similar bill during the 2014 legislative session that would have provided legal protection to public schools and teachers who want to celebrate Christmas in their classrooms. The measure would have let teachers honor Christmas traditions, such as putting up a Christmas tree, as long as they also recognize at least one other holiday celebration, such as Kwanzaa or Hanukkah. The measure passed the Senate but stalled in the House.

The bill eventually stalled in the legislature, but to be clear, all of this was already legal. It just pandered to his Christian base, so that was that. (He modeled it after a similar bill that passed in Texas last year.)

This year, Smith is incensed over the controversy in Franklin County, so he plans to file the bill again — and expand it:

This year, Smith wants to expand the bill to permit religious holiday displays on city and town properties, such as city halls, as long as they are coupled with secular displays or recognize multiple faiths.

So the new bill will allow people to do even more of the things… they could already do before. Smith somehow found a way to make his bill even more useless.

“The Christmas season encompasses so many meaningful traditions, but many times these traditions and the people who participate in them are threatened,” Smith said. “Just this week, a town in Indiana is being sued by the American Civil Liberties Union on behalf of the Freedom From Religion Foundation for a Nativity scene that has been on display for more than a half-century on its courthouse lawn. This bill is a step toward defending a sacred holiday that is otherwise being stolen from our children and our culture.”

Huh. The only displays that seem to be vandalized are the non-Christian ones. Smith doesn’t care.

But more importantly: Nothing is being “stolen from our children.” Christmas will continue to be celebrated. What Smith wants is for his holiday to be given special treatment.

The town in Indiana could have avoided a lawsuit altogether by simply allowing those other displays. The problem is that the local government is putting up a Christian scene on city property — and nothing else — and it’s about time that came to a stop.

Maybe if Smith spoke with all of his constituents instead of just his Christian ones, he’d understand how good his people already have it.

At least the ACLU knows the “War” is really about protecting everyone’s rights:

Gavin Rose, an attorney with the Indiana ACLU working on the Franklin County case, said their legal action is about safeguarding the U.S. Constitution.

“The Indiana General Assembly can’t protect from a lawsuit under the establishment clause; it’s rudimentary that the U.S. Constitution trumps anything they try to do,” Rose said. “A lot of people really do get into this war on Christmas thing. It’s not a war on Christmas. It’s an attempt to make sure government abides by what the constitution recognizes is governments role actually is.”

Hopefully, the upcoming bill will stall just like last years. It won’t change anything, but it’d at least send the message to Smith that he needs to stop wasting everybody’s time.