According to the latest survey results from Gallup, 75% of Americans consider themselves some form of Christian — no significant change from last year — while the percent of Nones/Atheists/Agnostics is pretty steady at 16%: 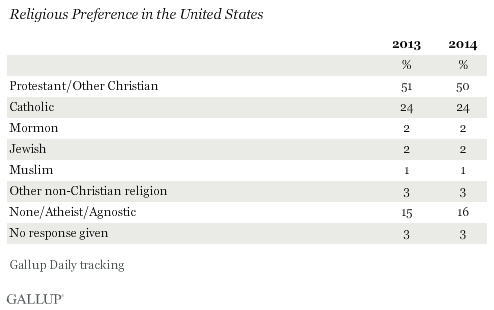 You’ll notice a very tiny change from last year and it follows the general trend of people shedding their faith:

The slight erosion of Americans’ identification as Protestant and concomitantly slight increase in the percentage with no religious preference exemplifies general trends in religious identity over the past decades.

Keep in mind, of course, that “Nones” is quite the catchall term since many of them believe in a higher power even if they don’t use a religious label. So it’s not like 16% of Americans are atheists. Not even close.

December 25, 2014
Indiana State Senator Wants to Pass Useless Bill to Protect Christmas from... Well... No One
Next Post