Catholic Journalist Paints a Bleak Picture of the Church’s Decline in Popularity, but Knows Just How To Fix It December 25, 2014 Terry Firma

Catholic Journalist Paints a Bleak Picture of the Church’s Decline in Popularity, but Knows Just How To Fix It

“… a heretical nun or a traitorous priest or bishop when they see one — not so they can vote them out of office, but so they can pray for them, one, and alert as many other Catholics as possible to their treachery.”

By traitors and heretics, Voris seems to mean people who don’t agree with his fundamentalist views of Catholic doctrine.

But when you narrow the definition of what it means to be a Catholic, guess what you get? Fewer Catholics, that’s what.

So it’s kinda funny to listen to Voris give a talk at the Canadian Christian College in Toronto, and hear him sound the alarm over how Catholics, in countries where they once wielded real power by numbers, are abandoning the pews in droves. He never seems to connect the holier-than-thou activism of hardliners like himself to that steady exodus.

The fun starts at 42:40, when he talks about parish closures. 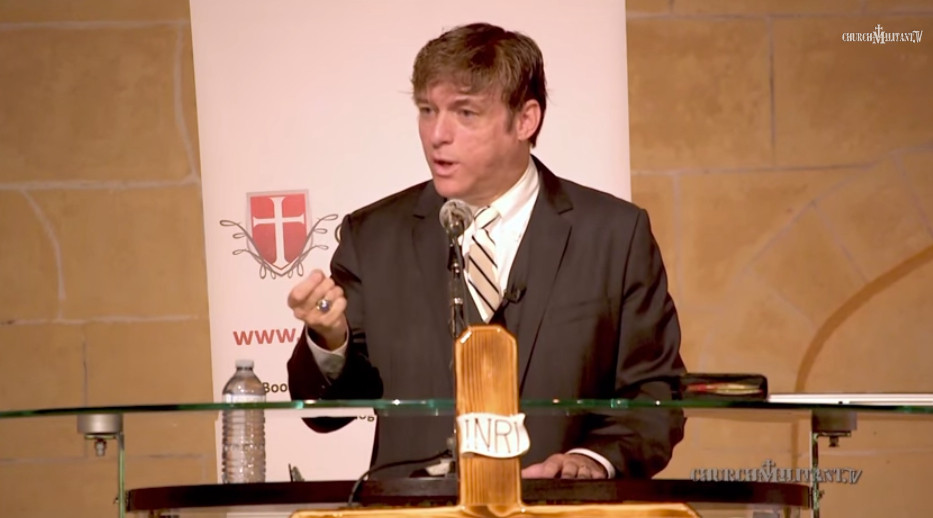 Or times for rejoicing, if you’re an atheist. Excuse the Schadenfreude.

“These things are happening all over the world. A kind of heartstopping smack-across-the-face statistic is that in the Netherlands, there are 16 million people. 4.1 million are Catholic, baptized Catholic, so roughly 25 percent of the population (500 years ago it was 100% of the population, thank you Protestant Reformation or Protestant revolt). So you have 25 percent that’s Catholic. Four million, one hundred thousand baptized Catholics on the rolls. Of the four million one hundred thousand, one hundred thousand go to mass. Two percent. And most of that two percent — ’cause we’ve been there, sat in the churches and looked — either have white hair or no hair.

Voris no doubt suspects the answer (“On the grand scale, humanly speaking, it can’t be fixed”), but of course he must put a rah-rah spin on things. So we hear that, to turn the tide, God is in need of Catholics who will go out and proselytize. Remember, says Voris: What’s at stake is “an eternity in hell.” So it’s Catholics’ holy duty to tell others about what awaits them, all the more because

“Every single person we talk to has within themselves, even if it’s just the smallest measure possible, they have within themselves the truth, because they come from God, they were created from the hand of God, and they have that spark of the divine light within them. However much it’s besmirched, and smudged over, and unrecognizable, it’s there and you never know what you say, how that may correspond to them.”

Now how’s this for a sales pitch?

“This is going to cost you. You all know it. You open your mouth and the Human Rights Commission, right [sneering, mimicking] ‘Well, they don’t like people who are gay, so we’re going to take away their house.’ You don’t need a house in heaven, you’ve got a mansion waiting for you. Maybe they’ll put you in jail. Well, St. Paul was in jail, you got good company.”

Wait… So being a moralizing Catholic might mean the government will seize your home and imprison you? For real?

Apart from this always unattractive fetishization of Christians’ own imagined future suffering, what’s bizarre is how unsuccessful badgering other people with one’s faith will most likely be. Proselytizers must find that for every person who shows a glimmer of interest in their bleatings, there are many more who are thoroughly put off by self-styled freelance preachers. Pester non-Catholics enough, and their attitudes towards the Church will only harden.

Voris asks where the Church will be in ten years. I have a decent hunch. The Catholic faith may grow in African countries and some other places, but it should be impossible to restore to its former glory in the nations whose ostensible spiritual decline he cites — the United States and the Netherlands.

And on the off-chance that Catholicism does make something of a comeback, it will probably be thanks to Pope Francis’ exemplary PR offensive, and despite hotheads like Voris who like to point fingers and yell “Heretic!” and “Sinner!” at Catholics and heathens alike.