We Three… Zombies of Orient Are?

Nativity scenes are pretty common this time of year, but an Ohio man has managed a unique twist on his. Deer Park resident Jasen Dixon, manager of a local haunted house, put together a haunted manger scene, featuring a zombie Jesus and other ghoulish figures: 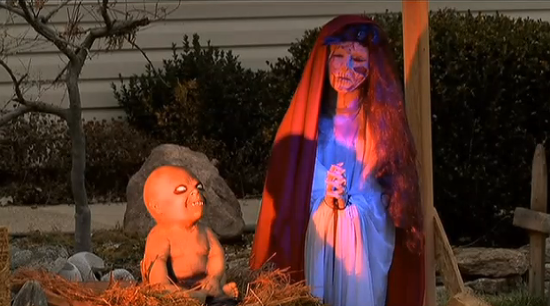 While there’s no word whether his undead wise men came bearing gifts of incense for their zombie king, some were incensed at the sight of the display.

“I wanted a Nativity and I worked with what I had,” [Dixon] told Fox 19. “The neighbors don’t like it. My father hates it and anything bad that happens he blames it on that.”

The Nativity scene features life-size figures and a zombie baby Jesus, with pale skin and pure white eyes. At night, the figures are illuminated by red and green lights.

It wasn’t long after the manger went up that the township’s Grinches informed Dixon that his festive display violated local ordinance governing the size and location of such structures. Dixon was given until the 26th to take down his nativity scene, on threat of legal action if he fails to comply.

So much for holiday cheer…

December 24, 2014
More Youth Pastors Are Nabbed for Sexual Assaults on Children
Next Post