When hundreds of people recently gathered at the RiverTown Crossings Mall in Grandville, Michigan to sing “Amazing Grace,” did some atheist goon squad really try to put a stop to it? Did security guards actually attempt to intervene and break up the crowd? You might get that impression if you read Charisma News, which published this headline:

The Freedom From Atheism Foundation, on its Facebook page, also got in on the act: 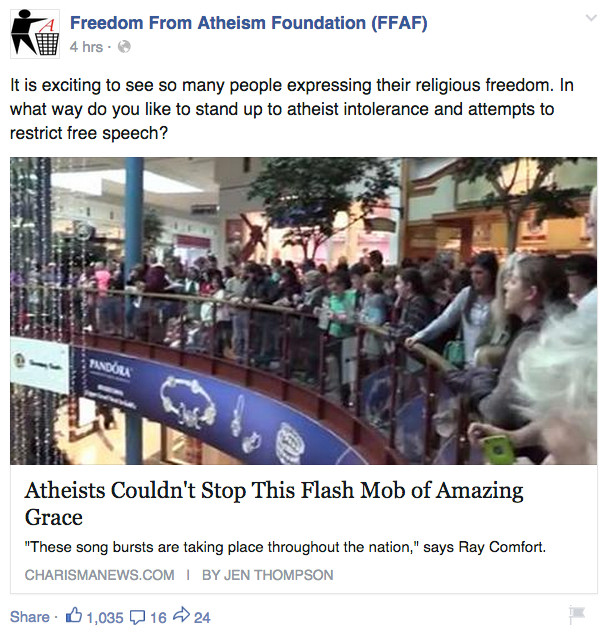 It is exciting to see so many people expressing their religious freedom. In what way do you like to stand up to atheist intolerance and attempts to restrict free speech?

Ray Comfort, who, according to Charisma News, came up with the idea, commented:

“Fortunately the singing at the Rivertown Mall was video-taped, and it brought tears to my eyes. … At the beginning security guards are walking through the crowd not knowing who to stop.”

Like Comfort, I’m happy that the video exists, because now we can see check these claims for ourselves. Watch:

Wow, did you see that? The protests? The anger? The violence? The oppression?

If there are atheists in the scene, they don’t make themselves known anywhere. They apparently respect other people’s right to — get this — sing a tune.

One of the least attractive features of the Jesus faith is the depthless, witless, facts-be-damned conviction that Christians are being harassed and persecuted everywhere they go. Even, I guess, at the mall, where Christians have broken out into singing flash mobs before.

If Charisma, Comfort, and the FFAF are the least bit interested in the observable truth (fat chance, I know), they’d have to do more than imagine and publicize that atheists were trying to stop the Christian singers. They’d have to show proof. Anything less is slanderous.

Lying isn’t just undesirable; it actually goes against the core text that sums up these people’s professed beliefs.

Can there ever be grace, much less amazing grace, in telling a lie? I don’t think so, but then, I’m just a heathen. Perhaps some of the Christians can enlighten me.

December 23, 2014
The Pastor Trying Out Atheism for a Year is Coming to the End of His Journey
Next Post