Ken Ham is Angry That the Creation Museum Was Used as a Punchline on Saturday Night Live December 22, 2014 Hemant Mehta

Over the weekend, Saturday Night Live‘s Weekend Update segment featured the songwriting duo of Garth & Kat, who never seem to prepare their songs ahead of time. (You love ’em or you don’t.) 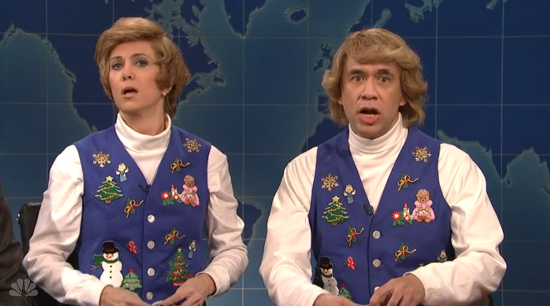 The whole point of the sketch is that these two are pretty incompetent at what they do.

At one point, when anchor Michael Che told them they needed to leave the studio, they pleaded their case by saying “We came all the way from the Creation Museum!” (“Yeah! Moses had a dinosaur. Did you know that?”)

There were a few laughs, but the joke fell pretty flat.

Wouldn’t you know it, though, Ken Ham saw this as Christian Persecution in action:

The reason I’m posting this video is to demonstrate that the mocking of anything Christian in the culture is growing. We see increasing attacks by the secularists on Christianity — they have become so bold now that they’ve been successful in removing crosses, Nativity scenes, and Ten Commandments displays, and have been imposing their own atheistic religion on the culture. Recently, they have been increasingly spreading lies in a propaganda campaign of misinformation about our future Ark Encounter project (and had been doing that in regard to the Creation Museum for many years).

Imagine what would happen if the cast of Saturday Night Live mocked Muslims? I wonder if they have ever mocked atheists in the same way they do Christians?

First of all, this wasn’t mocking Christians. This was mocking a subset of Christians whose views are subjectively silly and objectively untrue, even to other Christians. And if this is what you consider an “attack” on your faith, then you have it pretty damn good.

It’s also not an attack when atheists defend church/state separation when Christian groups act like they’re above the law. No one was spreading lies about Ark Encounter, either. They were using Answers in Genesis’ own website to prove that they were not adhering to the requirements in applying for tax breaks.

What about mocking Muslims? Well, SNL has poked fun at Muslim extremists before. Some Muslims (as well as conservative Christians) were also offended by a parody of Django Unchained called “DJesus Uncrossed” in 2013.

SNL makes fun of atheists, too. When American Atheists President Madalyn Murray O’Hair went missing a decade ago (before her dead body was found), Weekend Update had a joke about how her family was asking “everyone not to pray.”

And don’t forget Louis CK‘s monologue from earlier this year when he misrepresented atheists’ views (even though I was laughing throughout his set):

The point is that none of these are “attacks” on anyone’s beliefs. They may rub you the wrong way, or you might not find them funny, but they’re not below the belt by any means.

Plus, it’s not hard to make fun of the Creation Museum since it’s already something of a parody. Did you notice how, in this weekend’s sketch, they didn’t even need to describe the museum to get laughs? All they had to do was say the museum’s name. That was the joke.

Ham should be thanking SNL for the free publicity, not acting like a victim.

December 22, 2014
An Atheist's Guide to the Caricatures in the Forthcoming Christian Film Do You Believe?
Next Post

December 22, 2014 French Driver on a Rampage, Shouting "Allahu Akbar," Injures 11 As He Plows His Car Into Five Different Crowds
Browse Our Archives
What Are Your Thoughts?leave a comment