Feelgood Story of the Day: In Lovely Gesture, Muslim Bride Places Her Bouquet at Tribute to Sydney Hostage Victims

I’m glowing a little inside, and I don’t think it’s the eggnog:

As the Sydney siege memorial grows, a Muslim bride has made a pilgrimage to Martin Place on her wedding day. Manal Kassem was adorned in a white dress, hijab and veil when she laid her wedding bouquet on the river of floral tributes to the fatal Lindt cafe siege victims. After watching the wedding party approach, the city crowd broke into applause. 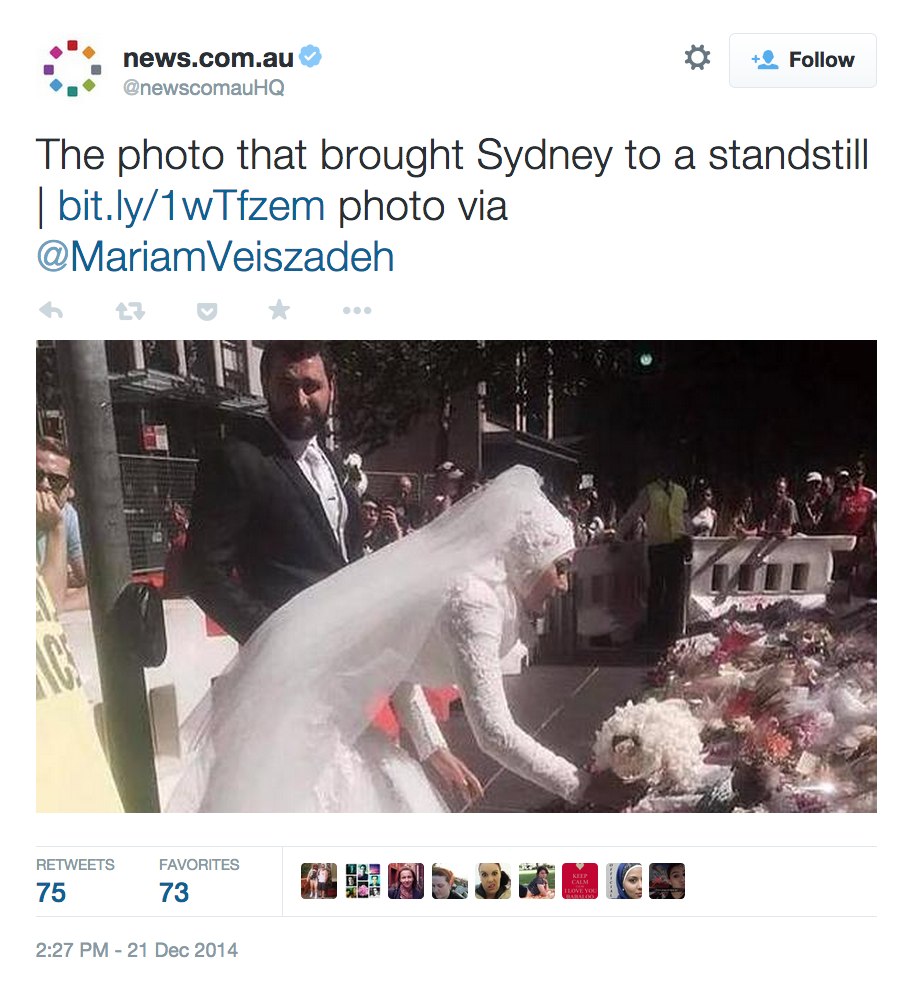 The 23-year-old bride had chosen the city for her wedding photoshoot, but was hesitant after the siege, says her wedding planner. “She was going to cancel [the photoshoot] because she didn’t want to be judged … celebrating her wedding in a scarf while people were terrorised,” wedding planner Dina Kheir told AAP. “But she made it her priority to visit the memorial site as the first pit stop. “She did it out of respect for her country, that will one day be the country of her children and grandchildren.”

The bride … approached the expanding floral tribute on Saturday with her groom, Mahmod Homaisi, as onlookers stared, a witness said. When Ms. Kassem laid her wedding bouquet onto the ground, they applauded.

Untold millions of Muslims have no sympathy for those who commit violence in the name of Allah, and Manal Kassem briefly served to represent them all.

Also, I have to commend the Ozzies on their reaction in the aftermath of last week’s fatal hostage-taking. More than 280,000 Australians took to Twitter with the hashtag #IllRideWithYou, offering to accompany Muslims dressed in traditional garb who might be nervous to go out in public.

December 22, 2014
Franciscan Group Says It Could Go Bankrupt Due to Multi-Million Dollar Theft By Its Own Friars
Next Post