Rev. Franklin Graham: Christians Whose Lives Are in ISIS’ Hands Should Choose Martyrdom Over Lip-Service to Islam December 20, 2014 Rachel Ford

Rev. Franklin Graham: Christians Whose Lives Are in ISIS’ Hands Should Choose Martyrdom Over Lip-Service to Islam

Evangelical Christian Reverend Franklin Graham was on Fox News’ The Kelly File recently and the discussion revolved around a topic cherished at Fox: Christian persecution. But not the usual December horrors, like “my grocer said ‘Happy Holidays!”

Instead, while Graham and Megan Kelly were sparse on specifics, they referenced some real examples of Christians in danger in the Middle East. Graham was insistent that President Obama should be “doing more” to protect Christians around the world. It was, in short, his typical saber-rattling stuff.

But after implying that Obama just doesn’t care about the lives of Christians, Graham demonstrated exactly how much he cares about them. 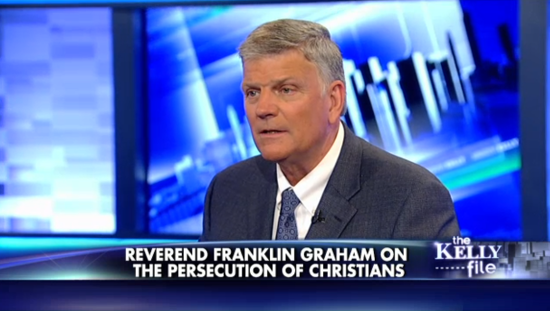 Kelly told a story about children killed by ISIS for refusing to convert to Islam, and asked her guest,

But, in those circumstances, should Christians consider saying what the enemy wants them to say to preserve life?

No. No. I think we take a stand for our faith. Christians have been martyred going all the way back to the Romans when they fed ’em to the lions. We would be betraying every person who stood for their faith, who stood for Jesus Christ, if we turned our back on Christ.

I’m not sure what “we” Graham is talking about here. It is beyond absurd to suggest that a privileged American evangelical, who has an empire of wealth and (undue) influence, who has prayed at a presidential inauguration, who is consulted on matters for which he has zero expertise simply because of his last name and religious affiliation, is in any way a victim of religious persecution. On the contrary, Graham is a beneficiary of extraordinary religious privilege.

So what is this “we take a stand for our faith” nonsense?

It’s terrible that Graham would insist that children must accept being beheaded, rather than paying lip service to the ideals of the religious fanatics threatening them. It’s disgusting that he, living in comfort, ease, and safety, would try to lay guilt on people who would lie about their faith to save themselves and loved ones from terrible peril and death. And it’s despicable that these instructions come with the implicit suggestion that he, flapping his gums in safety and security, is somehow participating in the suffering he’s self-righteously demanding.

Graham’s comments display the worst of the American right-wing Christian persecution complex. He is happy to insist that other men (and children) die for his God, while he, enjoying freedom and security, fantasizes that their struggles are his own.

December 20, 2014
Headstone Makers in New Jersey Score Victory Against Church-Based Competitors Who Are Tax-Exempt
Next Post