This Promotional Video for the Christian Movie Do You Believe? Raises Multiple Red Flags

This is a guest post by Andrew Spitznas, M.D.. Andrew is a board-certified psychiatrist and member of the North Carolina Film Critics Association. He has contributed to the Tinsel blog in the past and is currently a regular contributor to 1 More Film Blog, both on Patheos. During the past decade or so, he’s progressively deconverted from the fundamentalist Christian faith of his youth.

Pure Flix is presently best known for their movie, God’s Not Dead. Released earlier this year, it generated $60 million in domestic revenue on an investment of just a few million dollars, despite a dismal 17% critic’s approval rating at Rotten Tomatoes.

Now, Pure Flix is gearing up for the March rollout of their next film, Do You Believe? The company uploaded a 9-minute promotional video aimed at church leaders earlier this week. Having viewed it a couple of times, it raised numerous red flags for me as an atheist, film critic, and health care professional. 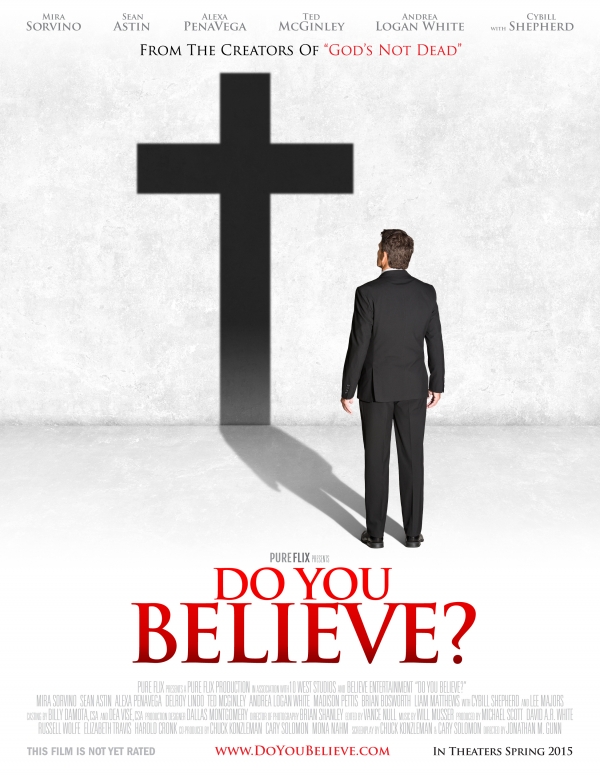 First, the arrogant smugness of the creators of these two movies seems almost boundless. The video is hosted by David A.R. White, one of the producers of both films. In his introduction, White pats himself on the back for the splendidness of God’s Not Dead, claiming that it “validated the existence of God.”

That’s a doozy of a claim, considering that counter-apologists can easily point out the gaping holes in the arguments for God’s existence posited by apologists like Thomas Aquinas and C.S. Lewis. If their arguments are that flimsy, I don’t have much hope for White and his cohorts. In fact, in my own review of God’s Not Dead, I pointed out at least seven major flaws in the reasoning employed by Josh Wheaton and other Christian characters in this movie, including the use of ad hominem attacks, the Straw Man argument, and the appeal to emotion.

David A.R. White then proceeds to state that the core question driving their newest movie is “what comes next, after you fully understand who God is?” What presumption! Even when I was a Christian, I didn’t believe that I would completely comprehend the divine until after I breathed my last, let alone immediately after I prayed the sinner’s prayer. In this lifetime, “we see through a glass darkly,” and only in heaven will we “know as we are known,” right?

Frankly, such spiritual certitude is frightening. From total confidence that one knows the mind of God, it is only a small cognitive leap to other forms of black and white thinking, such as demonizing those who don’t live and believe as you do.

Which leads me to my second point. Looking at the trailer for Do You Believe? and its promotional video, it appears as though this movie, like its predecessor, employs ugly stereotypes in its depiction of unbelievers.

In God’s Not Dead, Kevin Sorbo and Dean Cain played nasty, bullying, coldly materialistic characters whose vileness was a natural offshoot of their godlessness. In Do You Believe?, we’re served up a physician who self-pityingly resents that God gets the credit when his patients survive. (Since he’s played by lovable, cuddly Sean Astin, wanna bet that he sees the light before the credits roll?)

More notably, we also have a sinister lawyer (below) who’s prosecuting an emergency medical technician (EMT) who shared his faith with a dying patient. This attorney’s villainous caricature just needs a Snidely Whiplash moustache to twirl as she gloatingly tells the EMT that she’s only pursuing this case for the money. (My money’s on a humiliating, triumphal comeuppance in the courtroom for her.) 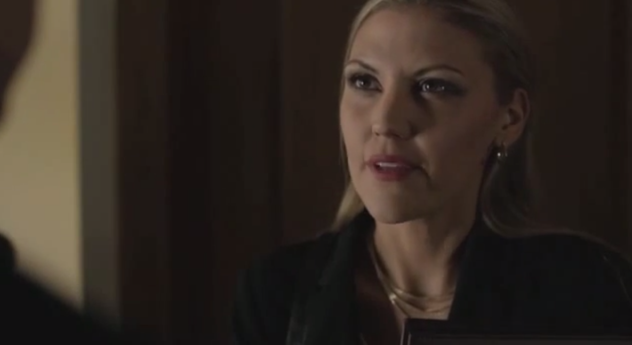 Next, this entire subplot indicates that Do You Believe? will be continuing the work of God’s Not Dead in perpetuating the myth of American Christian persecution. How such persecution could occur so systematically as to warrant coverage by two Pure Flix films boggles my mind, considering that only 5-7% of our population identifies as atheist, in a country lacking a single openly atheist congressperson.

I’d also like to comment a bit on the artistic merits of this upcoming movie. Obviously, I reserve final judgment until I see the entire film next year. However, based on the clips currently available, it looks as though the acting in Do You Believe? will be a mixed bag, as opposed to the unrelenting awfulness of God’s Not Dead.

No doubt, this anticipated improvement has much to do with a stronger cast. The likes of Mira Sorvino, Cybill Shepherd, Delroy Lindo, and Sean Astin are a clear upgrade over the God’s Not Dead showdown between Kevin Sorbo and Shane Harper.

On the flip side, the same screenplay writers (Chuck Konzelman and Cary Solomon) have been used for both movies. This explains how the new film appears to suffer from the same toxic flaw of confusing didactic preachiness with dialogue that resembles how real people actually communicate with each other. This lackluster writing also undoubtedly contributes to acting in some clips that is as wooden as the giant cross that Delroy Lindo implausibly lugs around the sets of Do You Believe?

The excerpt featuring the gang member on the run from cops (around the 3:00 mark) raises additional questions of artistic originality. With police lights shimmering around the church building and a cop ominously entering the rear of the sanctuary, this scene borrows heavily from the climax of Robert Duvall’s The Apostle.

Again, until I see the final product, I’ll defer a definitive conclusion on whether this sequence is a flagrant ripoff. At least Do You Believe? is drawing inspiration from a top-drawer film (91% critical approval on the Tomatometer). With The Apostle’s fine sense of pacing and resonantly emotive performances, Pure Flix could learn a thing or two from studying this movie.

Lastly, I want to address the EMT subplot of Do You Believe? from my vantage point as a physician. I have to give credit here to the Christian Medical and Dental Society, from whom I learned as a medical student that it’s inappropriate to use our caregiving role as a soapbox for proselytizing.

Since I’ve never been an EMT, I can’t comment on their specific code of conduct. For my specialty of psychiatry, however, it is unambiguously unethical to try and convert patients to your religion. Such misbehavior would be an abuse of one’s position of authority in the doctor-patient relationship, not to mention utterly unrelated to the reason a patient is seeking your care.

These same concerns would surely be problematic for an EMT, so the fact that Do You Believe? uses an EMT’s evangelization efforts as a key plot point sends up yet another red flag. Again, we’ll see how this plays out in the completed movie. For now, however, where the filmmakers claim wrongful persecution, I see a case that would likely call for prosecution by this EMT’s governing licensure boards.