This Photo, and Its Caption, Finally Made Me Realize That, Yes, I’m an Anti-Theist December 19, 2014 Terry Firma

This Photo, and Its Caption, Finally Made Me Realize That, Yes, I’m an Anti-Theist

I’ve always believed in live and let live. Different strokes for different folks. I still do, but I’m less inclined to be romantic about it. Yes, people should follow their conscience, express their personal proclivities and preferences as they see fit, and be allowed to speak their minds in almost any way they wish.

But I’ve come to a point where I can no longer tell myself that widespread irrationality, the belief in gods and ghosts, is just another lovely part of the tapestry of humanity. Most people, even non-believers, appear to have signed on to the National Geographic approach to foolish behaviors. The mindset of the magazine’s editors is, “Oh, look, there’s another group of worshipers. Let’s capture them in pretty light and pretend there’s something uplifting about the spectacle of people engaging in superstition and twaddle.”

I’m done. This photo, an award winner in the National Geographic 2014 photo contest, is the final straw. 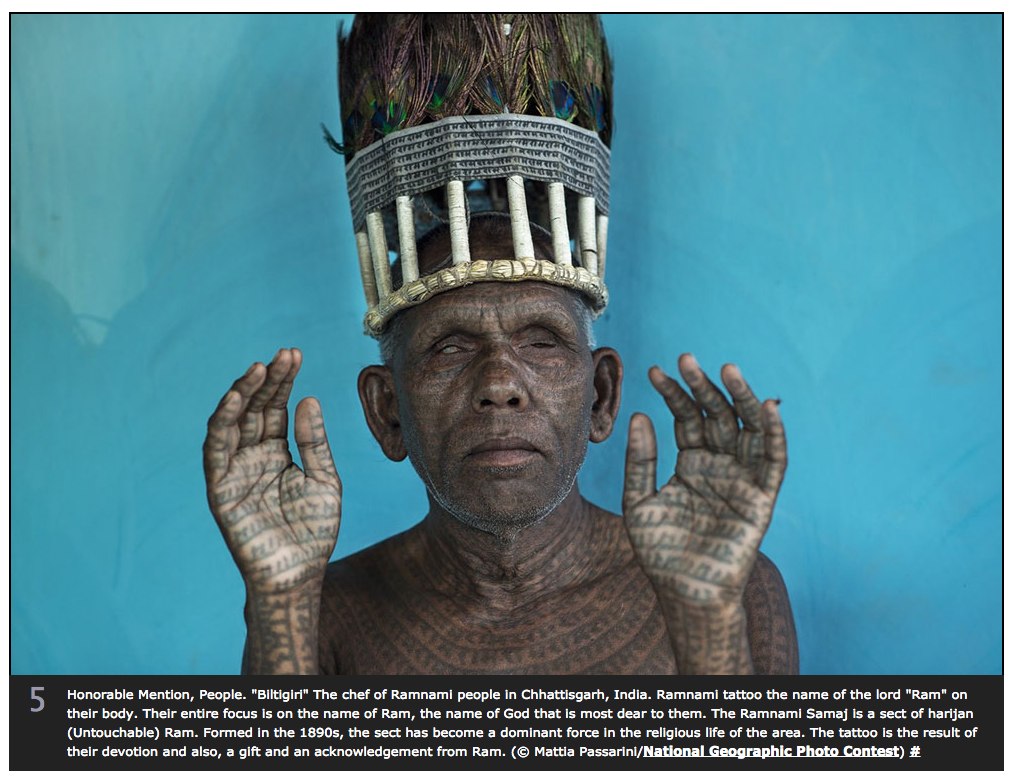 The chef [sic] of Ramnami people in Chhattisgarh, India. Ramnami tattoo the name of the lord “Ram” on their body. Their entire focus is on the name of Ram, the name of God that is most dear to them. The Ramnami Samaj is a sect of harijan (Untouchable) Ram. Formed in the 1890s. the sect has become a dominant force in the religious life of the area. The tattoo is the result of their devotion and also, a gift and acknowledgment from Ram.

I used to think that as long as people physically hurt no one — and for all I know, the Ramnami are exemplary moral and ethical human beings — I’d never have a problem with them. But in fact, I do. I’m finally entertaining the notion that almost all belief in the supernatural is harmful. It’s just a matter of degree.

For instance, it makes me despair to think how many hundreds of billions of hours humankind devotes to practicing faith-based nonsense every year.¹ While a small subset is inspired by faith to create beautiful art and music, and even schools and hospitals, I find it increasingly hard to believe that the preponderance of god-believers make a difference that, on the end-of-life balance sheet, falls decisively on the side of good.

At its most basic problematic level, religion is a time-suck of abominably gargantuan proportions. Those who are motivated by their faith to perform acts of real kindness still spend a huge part of their lives on their knees, when they could be doing that very thing for which they deserve genuine credit. They “study” and quote their scriptures ad infinitum, when they could use that time to invent and innovate, help run a soup kitchen, or clean up a stretch of highway. They endlessly perform their ablutions and baptisms and other rituals, when they could use those countless hours to build a great(er) business, advance science, or run errands for the sick and infirm.

And they each spend additional hundreds or even thousands of hours instructing their children to make the same choices, perpetuating the productivity deficit.

That’s just for starters. Some of the other things we should probably insert into the equation are the propensity of even charitable, well-meaning religious people around the world to hijack school curriculums; treat girls and women as second-class citizens per the holy texts; discriminate against gay people and infidels; and all the other dreadful behaviors we chronicle on this blog day in day out.

Believe what you want. By all means, place your eternal trust in a Jewish zombie who once walked on water, if that wets your whistle. Should you wish, believe in holy prophets and necromancers and faith healers and all manner of other swindlers. For all I care, worship deities who want you to tattoo their name all over your body. I’ll defend your right to do it. Hell, I’ll even concede that some of it is curious and fascinating, the way a highway wreck or a pair of polka-dancing dogs might be.

But it’s not pretty, it’s not useful, and it’s not worthy of the slightest bit of respect, let alone reverence.

¹ By my back-of-the-envelope calculation, the tally of hours that humanity has wasted on religion is about 600 trillion — and counting. Here’s how I got there. The number of all the people who ever populated the earth is roughly 108 billion. Let’s say, generously, that superstitions had no hold on 15 percent of them. That leaves 92 billion people. If they lived an average of 45 years, and worshiped since they were toddlers, that’s about 4 trillion years total. We could multiply that by an average 150 hours a year per person (three hours a week — I’m spitballing here) spent on some form of religious observance.

What could we have accomplished in those 600 trillion lost hours?

December 19, 2014
Exposé in the Atlantic Reveals Many U.S. Zen Buddhist Teachers To Be Incorrigible Sexual Predators
Next Post