Missouri Republican’s Bill Would Ban Abortions Without Father’s Permission… Unless It Was a “Legitimate Rape” December 18, 2014 Rachel Ford

Suppose you encountered a circumstance where your right to bodily autonomy, to control your own reproductive choices, was disregarded. Your first thought probably wouldn’t be “now how can I deprive someone else of similar rights?” 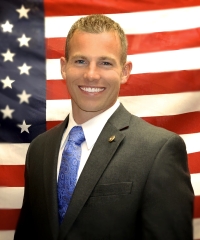 Brattin, a “devoted Christian” legislator with a history of promoting Intelligent Design and anti-abortion legislation, claims that he needed his wife’s permission to get a recent vasectomy. While Missouri Planned Parenthood notes that this is not a legal requirement in Missouri, some clinics (not Planned Parenthood) do make this procedure’s availability contingent on a wife’s permission. This, too, is an appalling disregard for a person’s autonomy and right to make his own reproductive choices.

But Brattin used that experience to make a point about why his state needed to come down even harder against such decisions:

Here I was getting a normal procedure that has nothing to do with another human being’s life, and I needed to get a signed form… But on ending a life, you don’t. I think that’s pretty twisted.

To that end, he wrote a bill that would impose such a requirement on women: that if they want an abortion, they must first get the permission of the man with whom they got pregnant. The bill requires that

Despite putting forth such an awful plan, Brattin recognized there might be some difficulty in shifting the power of a woman’s reproductive choices to her male partner. His solutions range from bad to terrible.

His answer to “what if he’s dead?” for instance, is forcing the pregnant woman to sign an affidavit to that effect.

It’s in his solution to “what if the man who impregnated her was a rapist?” where Brattin really hits rock bottom, though:

“Just like any rape, you have to report it, and you have to prove it,” Brattin tells Mother Jones. “So you couldn’t just go and say, ‘Oh yeah, I was raped’ and get an abortion. It has to be a legitimate rape.“

He actually used those words. But don’t get him confused with notorious gynotician Todd Akin. Brattin assures us that his use of the phrase isn’t to imply that women can magically shut down rape pregnancies. He’s not a monster, after all. He’s just awfully worried about women faking rape:

“I’m just saying if there was a legitimate rape, you’re going to make a police report, just as if you were robbed,” Brattin says. “That’s just common sense.” Under his bill, he adds, “you have to take steps to show that you were raped… And I’d think you’d be able to prove that.“

Mother Jones points out that “the bill contains no provision establishing standards for claiming the rape or incest exceptions,” so we’re left to guess at what Brattin might consider a reasonable guideline for weeding out the illegitimate rapes from the supposed legitimate ones.

But it’s also worth noting that the entire premise — that it’s just “common sense” that a victim of rape would report and prove it, if indeed the rape was “legitimate” — is simply false.

There are a number of factors that go into the decision not to report rape — including fear, shame, and a fear that the accusation won’t be taken seriously. But that doesn’t mean that rape didn’t happen in those cases (or wasn’t “legitimate”).

Furthermore, most reported rapes do not net convictions. Only 1 in 4 reported rapes result in arrests, and only about 3% of rapists serve jail time for their crimes. So to suggest that a rape victim could easily, during the period of time that an abortion was still legal, “prove” that she’d been raped is ludicrous.

Which Brattin should know if he’s trying to create law surrounding rape.

When asked if he would support an exception for women whose partners are abusive, Brattin says, “I haven’t really thought about that aspect of it.” But he adds, “What does that have to do with the child’s life? Just because it was an abusive relationship, does that mean the child should die?” Brattin notes that women in these situations can obtain protective custody once the child is born.

Never mind that financial dependency and threats against children are weapons in an abuser’s arsenal, to coerce a victim to stay, or that proving domestic violence is hardly an easy thing. That an abused woman might not want to have her abuser’s child is irrelevant; Brattin sees no issue with giving an abuser the right to decide whether his victim has access to an abortion or not. What, after all, would any of that have to do with abortion?!

The Christian pro-life crowd often couches its rhetoric in sweet sounding phrases, claiming to care about women, saying they’re motivated by a desire to “protect life,” etc. But the desire to control the reproductive rights (and, through them, lives) of women, as God intended, is often just beneath the surface. Sometimes, as with Brattin’s bill, a little more visibly than others.

December 18, 2014
Judge Voids Verdict in Case of Young Black Boy Who Died on Electric Chair, Perhaps With the Bible as a Booster Seat
Next Post

December 18, 2014 After Investigation, Georgia University Warns Professor Not to Preach Creationism Again or He Will Be Fired
Browse Our Archives
What Are Your Thoughts?leave a comment