Judge Voids Verdict in Case of Young Black Boy Who Died on Electric Chair, Perhaps With the Bible as a Booster Seat December 18, 2014 Terry Firma

Judge Voids Verdict in Case of Young Black Boy Who Died on Electric Chair, Perhaps With the Bible as a Booster Seat

Justice received posthumously is no justice at all. But maybe it’s better than nothing?

A South Carolina judge on Wednesday took the unusual step of vacating the 1944 conviction of a black 14-year-old boy, the youngest person executed in the United States in the past century, saying he did not receive a fair trial in the murders of two white girls.

George Stinney Jr. was convicted by an all-white jury after a one-day trial and a 10-minute jury deliberation during a time when racial segregation prevailed in much of the United States. Stinney died in the electric chair less than three months after the killings of Betty June Binnicker, 11, and Mary Emma Thames, 7.

In her ruling, Judge Carmen Tevis Mullen said she was not overturning the case on its merits, which scant records made nearly impossible to relitigate, but on the failure of the court to grant Stinney a fair trial. She said few or no defense witnesses testified and that it was “highly likely” that Stinney’s confession to white police officers was coerced. 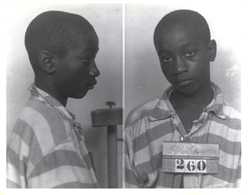 His sister, Amie Ruffner, 77, testified in a January hearing that he could not have killed the girls because he had been with her on that day.

One detail that stands out about Stinney’s execution is that he was too slight to fit into the electric chair, a contraption built for adults. According to Wikipedia,

Standing 5 foot 2 inches (157 cm) tall and weighing just over 90 pounds (40 kg), his size (relative to the fully grown prisoners) presented difficulties in securing him to the frame holding the electrodes.

What to do? Christianity’s Good Book to the rescue!

Stinney walked to the execution chamber with a Bible under his arm, which he later used as a booster seat in the electric chair.

But to be honest, I’ve wondered about that part of the story. At the moment of death, people often lose control of their bodily functions (this must especially be common knowledge in prisons with execution chambers). Would the warden, the pastor, and others present have allowed their Holy Book to be so defiled? Would Stinney, who was also a Christian?

Some sources, including NBC News, say that the boy did need a makeshift booster seat, but that a plain old phone book was used.

Whatever the case, considering that even today South Carolina’s population is about 93% Christian, seventy years ago the state certainly had no shortage of Bible-loving judges, prosecutors, and juries — many of whom would send a black boy to his death in a matter of hours, no evidence needed.

December 18, 2014
Surviving the Holidays as an Atheist
Next Post