After Investigation, Georgia University Warns Professor Not to Preach Creationism Again or He Will Be Fired December 18, 2014 Hemant Mehta

After Investigation, Georgia University Warns Professor Not to Preach Creationism Again or He Will Be Fired

Back in October, a group of science advocates including Jerry Coyne and Richard Dawkins, with the help of the Freedom From Religion Foundation, wrote a letter to Georgia Southern University.

It turned out that History professor Dr. Emerson T. McMullen (below) was teaching courses in which he advocated Creationism. 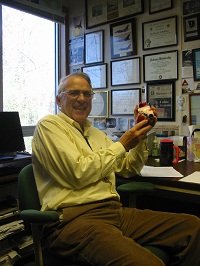 McMullen allegedly uses extra-credit assignments to try to “convert” students by inviting them to write about McMullen’s religious beliefs. He has reportedly also promoted Christian propaganda such as the recent movie “God Is Not Dead,” which pits an atheist professor against a Christian student.

Coyne examined some of the class material FFRF uncovered and expertly took apart the unscientific claims, noting that most of what McMullen said on the topic was “completely wrong.”

“A teacher should be free to express opinions, however ill-informed, so long as he or she makes it clear that they are no more than his opinions. He should not be free to penalize students who fail to parrot his opinions,” Dawkins noted. “And if his opinions include Young Earth Creationism, my personal opinion is that he is no more qualified to teach history than a ‘flat earther’ is to teach geography or a proponent of the ‘stork theory’ is to teach reproductive physiology.”

FFRF reported yesterday that the university completed its investigation and sent McMullen the results… It doesn’t look very good for him:

The memo directed McMullen to “cease religious discussion unrelated to the subject matter of [his] curriculum” and threatened termination if he did not comply.

The university confirmed the allegations, and uncovered other troubling practices. These include adding an extra credit question asking students to identify one of the Ten Commandments in each exam McMullen gave between Fall 2012 and Fall 2014. The memo said that McMullen is “directed to avoid asking religion-based questions on examinations where such questions are not related to the curriculum of the course.”

Please review this memo closely and make certain to comply with the restrictions contained therein. Failure to do so will place the University at risk of violating the Establishment Clause and will result in undue pressure on the students in your courses to conform to your personal religious views. Because of those risks, failure to comply with the directives herein may also subject you to personnel action, up to and including efforts to terminate your employment with the University. Please inform me immediately should you have any questions concerning this matter.

It’s amazing that, after all he’s done, he’s basically getting off with a warning… but maybe he’ll finally change his ways now that he knows people are watching him closely.

Even if he doesn’t, he’ll always have a job speaking to church groups as a victim of anti-Christian discrimination.

December 18, 2014
Missouri Republican's Bill Would Ban Abortions Without Father's Permission... Unless It Was a “Legitimate Rape”
Next Post