Now Who’s Waging War on Christmas? To the Dismay of Other Christians, Pastor Claims that Santa = Satan December 17, 2014 Terry Firma

Now Who’s Waging War on Christmas? To the Dismay of Other Christians, Pastor Claims that Santa = Satan

Pastor Edward Carothers seems like a barrel of laughs. He’s the man behind a church sign outside the Born Again Independent Baptist Church in Harlem, Georgia, that’s been raising eyebrows. It reads:

So what’s Carothers’ beef with the big-bellied gift-giver from the North Pole? 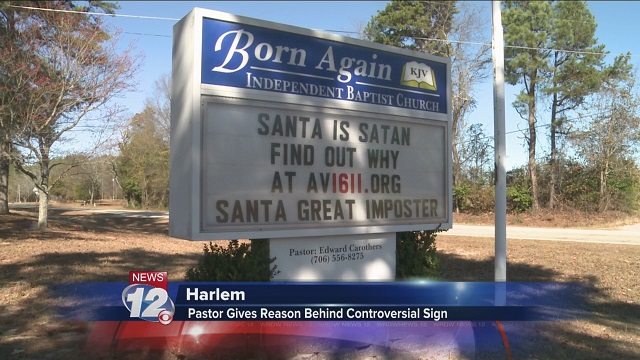 “We believe that Santa Claus is robbing Christ of his glory,” the pastor said. … “We have come to the point where we have replaced Jesus Christ and his birthday with a fictitious character named ‘Santa’ and we have lifted him up instead of lifting up the savior.”

Fine. But by equating Santa with the Evil One, pastor Carothers seems to have bitten off a little more than he can chew. People were annoyed beyond reason, he says incredulously.

“It’s amazing to me that people would get this upset over a fictitious creature,” he [told] News 12.

In case you hadn’t noticed, Carothers is miffed.

“You look all over the country and people have Santa Claus and reindeer and everything else up but no Jesus,” the pastor said.

Except in millions of mangers, in hundreds of thousands of Christmas sermons, and on the lips of about 150 million prayerful Christians.

I’m confused. Weren’t atheists supposed to be the Grinches?