Once Again, Florida’s Capitol Building Will Be Home to a Festivus Pole December 16, 2014 Hemant Mehta

Once Again, Florida’s Capitol Building Will Be Home to a Festivus Pole

Once again, Florida’s Capitol Building (already home to a Nativity scene, an FFRF banner, and a display from The Satanic Temple) will be home to a Festivus Pole, courtesy of atheist activist Chaz Stevens: 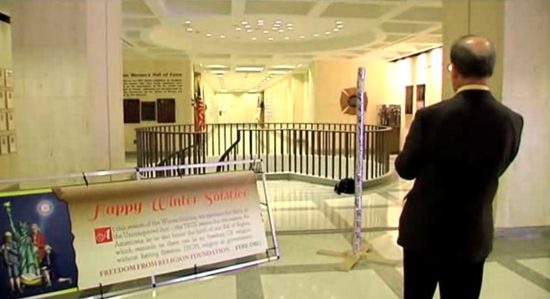 Stevens sees his pole as a protest against the nativity scene, intended to make a point about the need for a separation between church and state.

“My game plan was very simple, make a circus out of it, make it a fiasco, make it ridiculous,” Stevens said. “I hope next year that some Haitian fellows with the slaying of chickens want to come up, or some other crazy what not, because we need to take all of this out of here.”

It’s the second year of his display (though this year’s display is two feet smaller than last year’s).

Based on news reports, the Christian who put up the nearby Nativity scene is already airing her grievances:

Pam Olsen, president of the Florida Prayer Network, told the Sentinel she was disappointed by the anti-religion displays.

“They’re here to protest Christ and Christmas,” she told the newspaper. “While I don’t like some of the displays, and I think it’s inappropriate, I’m sad because I think we should look for the hope and the message of love and joy and peace that the holiday does bring.”

They’re not protesting Christ or Christmas. They’re protesting the government’s open door policy when it comes to religious and non-religious displays. It’s supposed to be a loophole to get Christianity in the Capitol, but everyone else might as well take advantage of the opportunity and show why the policy is such a bad idea.

December 16, 2014
Some Christians Love To Stuff Used Books With Godly Propaganda
Next Post