Michigan Officials Wanted to Keep a Satanist Display Out of the Capitol, but Their Rules Backfired on Christians December 16, 2014 Hemant Mehta

Michigan Officials Wanted to Keep a Satanist Display Out of the Capitol, but Their Rules Backfired on Christians

Looks like we’ll have to make a visit to the Michigan State Capitol building this year since officials there just gave the green light to a display from the Satanic Temple: 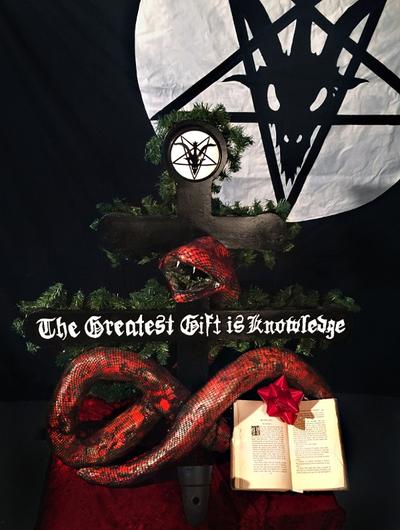 It comes just a couple of weeks after they received an okay to show their display in the Florida Capitol Building as well.

The display, which depicts a snake wrapped around the Satanic cross presenting a book as a holiday gift, will be featured on the northeast lawn at the Capitol Dec. 21 to 23, said Jex Blackmore, a member of the Detroit chapter of the Satanic Temple. The cross reads, “The greatest gift is knowledge.”

“Encouraging families to have important discussions and to learn from each other and to spend the holidays promoting knowledge … is just something we think is important,” Blackmore, whose phone number begins with the digits 666, said today.

There are three really incredible things about this story.

1) The Satanic Temple is never the aggressor in these cases. They always respond to what Christians do. The only reason they filled out an application to put up a display in Michigan is because a Christian group wanted to put up a Nativity scene first.

The Nativity… has been scrapped. [Michigan State Capitol Commission John] Truscott said today the Nativity was approved but the out-of-state person backing it couldn’t find someone to put up and tear down the display each day. That’s necessary because Capitol rules forbid permanent displays.

Hilarious. So Michigan will have a Satanic display that’ll go up and come down each day… and Christians will have nothing.

2) Check out what Truscott said in response to approving the Satanic display:

But on a personal level, Truscott said he thinks it is “absolutely disgusting to hijack a Christian holiday,” and he expressed hope that the public will “just completely ignore these negative forces.”

Yeah! How dare anyone hijack a Christian holiday… even though it’s a holiday that was hijacked from Pagans to begin with…

3) Last night, I spoke with The Satanic Temple spokesperson Lucien Greaves, who shared with me this incredible story:

When Jex first reached out to the Capitol Commission to learn how she could submit our display, she refrained from mentioning that she is a representative of the dreaded Satanic Temple.

Jex was told at that time that the new requirement for holiday displays (that they be taken down each evening and replaced again in the morning) was a result of trying to deter “that group from Florida” — clearly a reference to The Satanic Temple — winning the right to exhibit our holiday display in the Florida Capitol Rotunda.

It seems that, despite Michigan’s efforts to specifically exclude The Satanic Temple’s display, they’re going to get it, anyway. And they won’t even have the Nativity scene they obviously favored.

That’s the greatest thing ever. They tried to create rules to exclude Satanists… and those same rules will now exclude Christians.

All of these “problems” would go away if state officials just put a blanket ban on displays from religious and non-religious groups. It’s that easy. (That wouldn’t even stop them from putting up lights and trees and being festive.)

If anyone wants to complain, though, then start by calling up the folks who fight every year to put up a Nativity scene. If they stop, so will the Satanists.

December 16, 2014
Gay-Friendly Kansas Minister Hears How One Christian Opponent Wants To Cut Her Head Off and Put It On a Stick
Next Post