Researchers Studied a Decade’s Worth of Atheist Conferences to See If We’re Getting More Diverse December 15, 2014 Hemant Mehta

The stereotypical atheist is usually a white guy — Richard Dawkins, Christopher Hitchens, Bill Maher, to name a few — but there’s been a push over the past several years to go beyond that, to promote the views of atheists who are women, minorities, LGBT, etc.

Sure, you might be able to name people who fit one or more of those categories, but one way to quantify whether there’s a real shift happening movement-wide is by looking at who’s speaking at various atheist conferences.

Christopher Hassall and Ian Bushfield did just that.

They looked at “48 atheist conferences held between 2003 and 2014” to see what the trends were regarding women and non-white speakers, and they just published their results in the journal Secularism and Nonreligion. That meant analyzing as much as they could from “1223 speaker slots and 630 different speakers.”

So what did they discover?

Women represented just over 30% of all the conference speakers they looked at over the past decade, which is significantly below the percentage of female atheists worldwide. 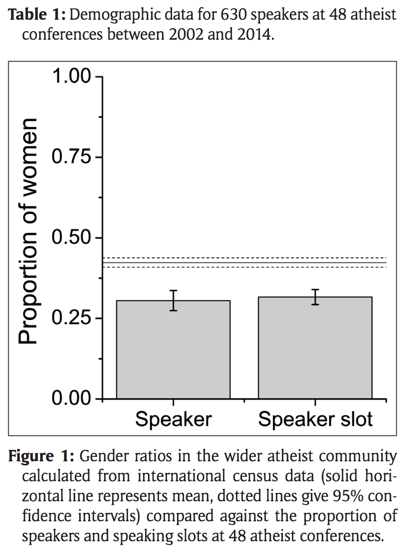 That’s disappointing, to say the least, but there’s some good news when you look at the overall trends regarding women and non-white speakers: they’re heading in the right direction:

(Even when you exclude the three conferences that had exclusively female speakers, in the second graph above, the upward trend is still strong.)

The researchers conclude that

… [the atheist community] has succeeded in significantly increasing the representation of not only women but also non-white members of the community at prestigious conferences.

They key phrase there is “significantly increasing” — but when we started so low, we’re still far short of where we ought to be. (They make that clear in their paper.) Among their suggested “next steps,” the most interesting one — and perhaps the most obvious and easiest to implement — is this:

Target and diversify gatekeepers — while not experimentally controlled, there is evidence from observational studies that the number of female gatekeepers (in this case conference organisers) increases the representation of women speaking at conferences… [T]here is frequently a lack of transparency over the processes involved in the selection and promotion of members of communities to prominent positions (e.g. conference speakers). Gatekeepers (both male and female) therefore represent important candidates for study, and a primary target for the sort of evidence-based interventions described above.

I’m all for it. As someone who’s spoken at many conferences, you can see the differences in conferences run by men versus ones run by women. The speakers are different and that means the audiences are different. The same variety is seen between older and younger organizers — or straight and gay ones. That’s not to say one group is better than another, only that they bring different interests to the table and choose speakers accordingly.

A smart group would bring as many of those voices together when organizing an event. Why? Because the more diversity of all kinds you have in your speaker roster, the more kinds of people who will want to listen to them. And when atheism shouldn’t have anything to do with the color of your skin or your gender or your sexual orientation, there’s no reason our gatherings shouldn’t reflect that.

Remember: If you’re looking for quality presenters, they exist in every community. Believe me, the New Atheists aren’t the only game in town. It’s just a matter of finding people outside our usual bubble — many of whom you just might not be aware of — and inviting them to speak. One of the problem with our own community (and many others) is that we’re used to hearing the same voices, most of whom come from the same mold. If we can recognize that, we can work to change it.

Based on this study, that’s slowly happening — and we should be grateful for it.

I should mention that studying conferences is obviously just one way to quantify all of this. But since there aren’t many other places where atheists gather, it’s not a bad starting point.