Christian Pastor: “I’m Not Gonna Let Any of These Dirty Faggots Inside My Church” December 14, 2014 Camille Beredjick

Christian Pastor: “I’m Not Gonna Let Any of These Dirty Faggots Inside My Church”

Another child of God has called for gay people to be put to death.

Right Wing Watch graciously grabbed this video of Pastor Donnie Romero, the leader of Stedfast Baptist Church in Fort Worth, Texas, preaching that all “dirty faggots” want to “snatch your children” to “hurt and rape them.” He also cites numerous Bible passages claiming that his god advocates for gays to be destroyed. 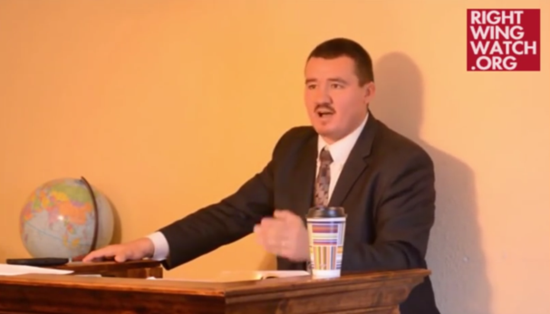 These guys, they are all pedophiles. Look in the Bible. Every time it shows the sodomites, in Genesis 19, in Judges 19, they’re always trying to rape and hurt other people. They’re relentless. They are relentless. They are predators and, given an opportunity to snatch one of your children, they would do it in a heartbeat.

And folks wonder why, in spite of the number of LGBT-friendly churches and people and places out there, queer people cannot shake the fear that Christians hate them and want them harmed. This is the answer.