Mississippi Pastor Puts a Wedding Dress on a Horse to Protest Gay Marriage (Because He’s a Neigh-Sayer) December 13, 2014 Hemant Mehta

Rev. Edward James of Bertha Chapel Missionary Baptist Church in Jackson, Mississippi is gliding swiftly down a slippery slope. In order to protest gay marriage rights, he stood in front of the courthouse downtown… next to a horse in a wedding dress.

This is how bigots think. 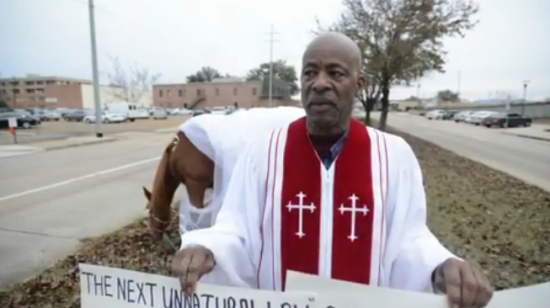 As Charlotte [the horse] grazed on an area of grass in a median along Court Street, James held signs in both hands as passersby stopped in the middle of the road to grasp what exactly was happening. One passing driver yelled, “Your horse is pretty!”

“The next unnatural law… Do you take this horse to be your unnatural wedded spouse to have and to hold?” one sign read.

“Marriage is one man and one woman… anything else is a perversion,” another sign read.

What’s with the crazy conservative obsession with marrying animals…? If it weren’t for them, no one would be talking about this. There’s a difference between two loving adults who consent to signing a marriage contract and a horse that has no clue what the hell is going on, a distinction that seems to elude all these Rick Santorum wannabes.

It brings to mind this wonderful headline in The Onion:

The state’s ban on gay marriage was struck down in Mississippi in November, but same-sex couples can’t get married yet. They’ll have to wait for an appeals court to uphold the ban and that hearing takes place on January 9. I’m optimistic, though, regardless of how far down that slope Rev. James slips.

December 13, 2014
Ken Ham's Latest Video Shows He Still Doesn't Get Why His Ark Park Isn't Getting a Tax Rebate
Next Post