Glenn Beck: Making Fun of Jesus on Family Guy is Much Worse Than Crucifying Him December 11, 2014 Rachel Ford

Glenn Beck: Making Fun of Jesus on Family Guy is Much Worse Than Crucifying Him

Over the weekend, Fox aired an episode of Family Guy called “The 2,000-Year-Old Virgin,” in which a set of characters set out to help Jesus lose his virginity. 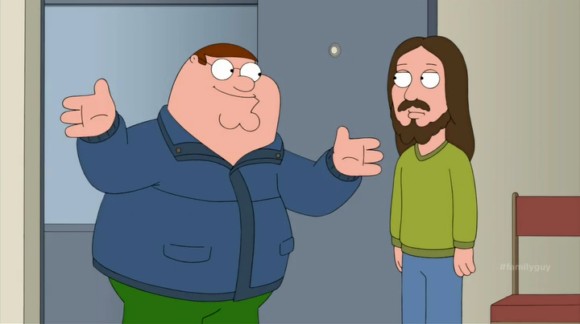 Needless to say, many Christians weren’t amused — but their reactions often were amusing. Young Conservatives, for instance, speculated that

… the creative team who thought this episode would be funny likes to wash down their bowl of hellfire with a tall glass of blasphemy.

But some of the best commentary came from Glenn Beck and his radio show co-host Stu Burguiere on Tuesday. Reacting to the segment, they expressed a great deal of outrage, confusion about history, and general inanity.

One of the themes of their conversation was that Jesus was responsible for pretty much everything good that anyone ever did. And I’m not even joking.

Can you tell me a man who has done more good on earth, any man that is even close, than the historic Jesus?…

Every great act, every great, truly great freeing act was inspired by the teachings of Jesus Christ. Why would we take down just that man? Why would we make him into a joke? Out of all of the people you can joke about, all of the things you can do? And did we sit here as a nation, and laugh?

And from here it gets even more bizarre. Beck wonders why those amused didn’t just subject him to the tortures of the crucifixion again, rather than mock him.

At this point, his co-host could have interjected, “Well, gee, ribald humor doesn’t sound quite as bad as brutal torture. Maybe he’d have preferred mockery to crucifixion.” He might have even noted that Beck was taking a lot for granted, and making some particularly egregious assumptions. Burguiere took a different approach, though, saying

I think you could argue this is worse.

Because we know now. ‘Father forgive them, they know not what they do.’ We do. We do.

Let that sink in for a minute. Beck (a Mormon) and Burguiere believe that Jesus was real, and that he was actually, brutally tortured and executed. And they are still suggesting that being portrayed in unflattering and mocking fashion is worse than that.

Which, I suppose, means they’re martyrs for their cause.

December 11, 2014 The Daily Show Was Wrong to Imply That Addressing a Minor Act of Discrimination Was Petty
Browse Our Archives
What Are Your Thoughts?leave a comment