Why Was This Teacher Pressured to Resign Over What Her Student Turned in for a Creative Writing Assignment? December 10, 2014 Hemant Mehta

Why Was This Teacher Pressured to Resign Over What Her Student Turned in for a Creative Writing Assignment?

There’s a story going around online about what happened in Katrina Guarascio‘s creative writing class at Cleveland High School in Rio Rancho, New Mexico. What’s especially striking about it is how little we know about what happened. 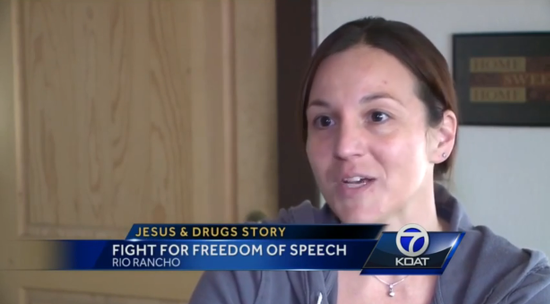 The assignment was to take a fairy tale or legend and rewrite it in modern times. One student changed the biblical story about Jesus handing out bread and fish to the poor to Jesus handing out marijuana to the sick.

“I don’t take any personal offense. It’s not written for me. It’s written for them. It’s how they can express themselves,” said Guarascio.

But according to the teacher, during peer review, one of the other students got highly offended by the story and told her parents. And then the teacher was put on administrative leave while the district investigated.

Guarascio said she felt targeted, harassed and forced to resign.

In other words, the teacher gave students a perfectly acceptable assignment, one of them turned in something that was arguably inappropriate, another student and her parents overreacted… and somehow, the administration blamed the teacher for all of this.

I honestly don’t know if the parents in question were more upset that a teacher allowed a student to write about marijuana… or that she allowed a student to suggest that a biblical story was a legend. Either way, there’s no evidence she encouraged either one. It’s more like, once she saw it, she just didn’t make a big deal about it.

As far as I can tell, the student who wrote the paper wasn’t penalized at all. Maybe you can make the argument that the student didn’t need to be punished. After all, it was a creative writing class, and that was definitely creative… but would this story have ended differently if Guarascio didn’t give the student any credit for the assignment, or if she had gone to her department chair?

And what about the student who complained? Guarascio said on Facebook:

… the student who complained actually boasted to her classmates about how she was “going to get her teacher fired.”

How is the media not paying more attention to that?

When I think back to some of the open-ended assignments I gave my own students — for example, in a Statistics class, find a chart or graph that’s misleading so we can discuss it together — and all the ways they could easily have turned that G-rated task into an R-rated one, I guess I should be grateful my students didn’t bring in something from Hustler.

If they had, though, would I have been punished for it?

Or maybe Guarascio was just sick of teaching and getting even mildly reprimanded over something like this was the last straw for her. (I wouldn’t blame her.)

But if she’s reading this, I hope she gets this message: There’s life beyond the classroom if you’re doing what you love. It sounds like she knows what her passion is and now she’ll be able to pursue it full time. At least I hope that’s the case.

I contacted both the school district and Guarascio last night to find out what we’re missing from this story… I’ll provide an update if/when I hear back.