Ken Ham is trying to drum up more publicity for his Noah’s Ark Theme Park with a new billboard campaign lovingly targeting his “intolerant liberal friends.” 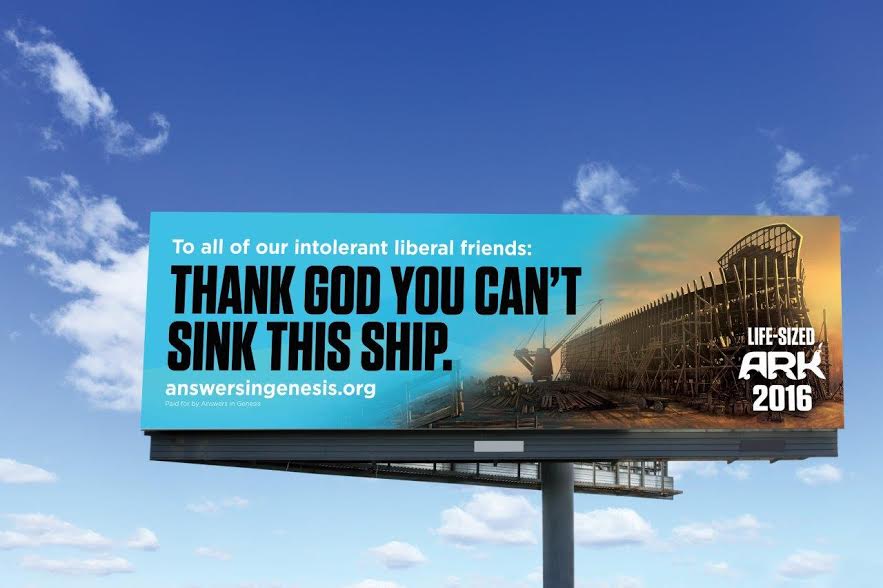 Atheists and secularists do not want to see Ark Encounter built and are doing everything they can think of to stop it — including spreading blatant lies and misinformation. They do not want anyone to learn that the Bible can be trusted and that observational science confirms the Bible’s account of history. They also don’t want people to be exposed to the life-changing messages of the Bible that will be boldly presented at Ark Encounter. They especially don’t want our kids—the next generation—to hear this truth…

These attacks on Ark Encounter highlight their intolerance of religion. Secularists are trying to keep any mention of Christianity out of the culture, and this includes the Ark of the Bible. In recent blog posts and articles we’ve pointed out numerous instances of the growing intolerance toward religion, especially Christianity, throughout our culture.

A few things about that billboard and statement:

1) Of course no one can sink that ship. It’s sitting on land. You don’t need God to keep that thing “afloat.”

3) No one’s stopping you from building your theme park. We just want you to play by the same rules as everyone else,

The only thing “intolerant” atheists have done is point out that you’re illegally adding religious restrictions to your hiring process even though Ark Encounter wants to be eligible for up to $18,000,000 in tax breaks. You can’t have both. Either hiring must be open to everyone or you give up the tax benefits.

4) We’re never going to be friends.

5) There’s no intolerance toward religion. You don’t see atheists working to shut down churches or ban Christians from holding public office. There’s only frustration with blissful ignorance, which Ham possesses in spades.

Those Christian Persecution billboards — all 16 of them — will go up throughout Kentucky, along with a digital version in Times Square.