Ken Ham Claims That I Believe Christ Came to Earth For Us December 9, 2014 Hemant Mehta

***Update***: Ham has updated his site with a correction. No apology, though…

… it’s the atheists who are destroying children’s lives by trying to force their anti-God, meaningless religion on generations of kids. People need to understand that atheists are not trying to stop children from being taught religion — they just don’t want them being taught the Christian religion, because they want to impose their own atheist religion on them.

That’s… just plain dumb. If I wanted children to become atheists, the best way to do it would be to expose them to as many religions as possible, including the most popular one in the U.S. Once they saw how similarly silly they all were, they’d want nothing to do with any of them. (At least in theory.) But there’s no need to exclude Christianity from that mix.

But here’s my biggest problem with Ken Ham’s rant.

When I saw American Atheists’ billboard, I brought up a quick criticism:

For the billboards to make sense, though, you have to let a couple of things slide.

Like: if the girl is too old for fairy tales, then why is she writing to Santa Claus…?

And does it really make* sense for a budding atheist to be celebrating Christmas?

I’m sure no one will notice.

Since it wasn’t clear in my original post, let me say it now: I was referring to the religious holiday of “Christmas” with that line, not the secular celebration of it. I enjoy the traditions and gift-giving and gathering with my family — and Jesus never enters into any of that.

But anyway, check out what Ham does with that passage — without linking to it, of course, because then his readers might start asking questions, and he can’t let that happen: 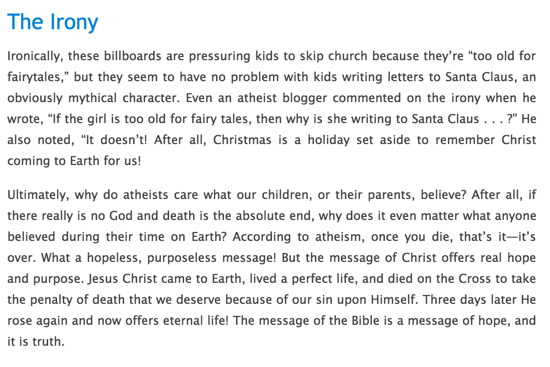 Ironically, these billboards are pressuring kids to skip church because they’re “too old for fairytales,” but they seem to have no problem with kids writing letters to Santa Claus, an obviously mythical character. Even an atheist blogger commented on the irony when he wrote, “If the girl is too old for fairy tales, then why is she writing to Santa Claus…?” He also noted, “It doesn’t! After all, Christmas is a holiday set aside to remember Christ coming to Earth for us!

This is what’s known as lying. It’s Ham’s specialty.

And why the fuck would any atheist say Christmas is all about “Christ coming to Earth for us”? It makes no sense.

Not that Ham’s fans noticed. That would require critical thinking and reading comprehension.

Or, you know, a link to the source material, which Ham refused to provide because then people might find out how he’s lying to them.

I know he has Google Alerts out on his name, so I’m sure he’ll see this.

Ken, I want an apology. Explain how you screwed up. And if you want to quote me in the future, have the decency to link to my original article, you coward.