Last week, Pastor Steven Anderson made some nasty remarks that, unlike most of the other horrible things he’s said, actually made its way to a wider audience:

… If you executed the homos like God recommends, you wouldn’t have all this AIDS running rampant. 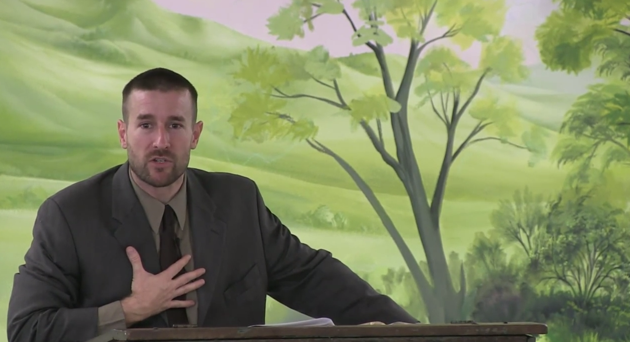 Over the weekend, there was actually a protest in front of his Tempe, Arizona church. I’m not sure it accomplished much, but it’s always nice to see people (including other Christians) denounce faith-based hate speech.

“He is not the voice of Arizona,” said Samantha Pstross, chair of the D-26 Democrats, a political organization that helped organize the demonstration. “We’re here to stand up and say this is wrong. Love wins. Love is greater than hate.”

Standing in the shade outside the front door of his church, Anderson ate yogurt and watched the demonstrators with members of his congregation.

“A lot of businesses pay to have sign-wavers. I’m just glad people know we’re here,” Anderson said. “I’m not ashamed of what I believe, I’ll preach it from the house tops. And anybody who wants to read it can go to the Dollar Tree and pick up a Bible.”

Anderson said to a reporter that he really wasn’t calling for the killing of gay people, but then added something stupid:

“I’m not saying people should take the law into their own hands,” he said. “I do think it should be against the law (to be gay).”

Not sure how that one would work… Does he want to punish thought-crimes? Does he want people to pay a fine if they have a same-sex attraction? (How much would that even be…?)

Actually, he’s lying about not wanting gay people killed. Because at the 51:00 mark of the video below, Anderson says that the government should kill homosexuals:

Well, the Bible actually teaches that gays should be executed… now, I’m not saying that I would ever kill anyone, because I never would, but I believe that the government should use the death penalty on murderers, rapists, homosexuals, and… that’s what the Bible teaches very clearly.

When the radio host, clearly shocked by this, brought up the government-sponsored jail sentences against gay people in Uganda, Anderson remarked, “So apparently I’m not the only person on this planet that actually believes what the Bible says,” a tacit endorsement of what they were doing there.

December 8, 2014
Atheist Displays in Arlington Heights (Illinois) Have Already Been Vandalized
Next Post