Indiana City, for Some Reason, Keeps Putting Up a Nativity Scene on Courthouse Grounds Every Year December 8, 2014 Hemant Mehta

Indiana City, for Some Reason, Keeps Putting Up a Nativity Scene on Courthouse Grounds Every Year

There’s a Nativity Scene in Brookville, Indiana that has been up for over 50 years, despite warning letters (over the course of several years) from the Freedom From Religion Foundation to take it down.

Here are the only details that matter: The display is owned by the Town of Brookville and sits on the grounds of the Franklin County Courthouse. 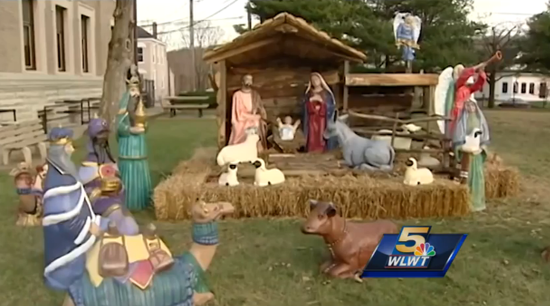 The defenders of the display cling to the same old arguments as usual: It’s tradition. Just look away. Why do you hate Christmas?!

None of them care to address the legal issues.

The commissioners said they have been ignoring the letters, and instead rallying and fighting to keep the nativity there.

“If people don’t like the look of it I think they can look the other way, or don’t look at all. It’s been a tradition here for many, many years and I hope it’s for many more years. I think we deserve the right to put up what the community wants and I don’t think anybody else should tell us what to do,” Brookville resident Wayne Monroe said.

“We” is the key word there. Residents can put up whatever they want on their own property. The city, however, can’t promote a particular religion. It’s that simple.

December 8, 2014
Book on the Irish Priesthood Reveals Struggles with Teachings on Celibacy, Homosexuality
Next Post

December 8, 2014 Friendly Atheist Podcast Episode 32: Horus Gilgamesh, Author of The Awkward Moments Children’s Bible
Browse Our Archives
What Are Your Thoughts?leave a comment