Crucifix Stolen From Church of Saint Anthony, Named After the Patron Saint of Lost or Stolen Items December 8, 2014 Rachel Ford

Crucifix Stolen From Church of Saint Anthony, Named After the Patron Saint of Lost or Stolen Items

This past Wednesday, a church in the Bronx was the scene of a peculiar theft. A five-foot crucifix, worth $5,000, was taken from the lobby of the Saint Anthony of Padua Roman Catholic Church. The cross went missing during mass. 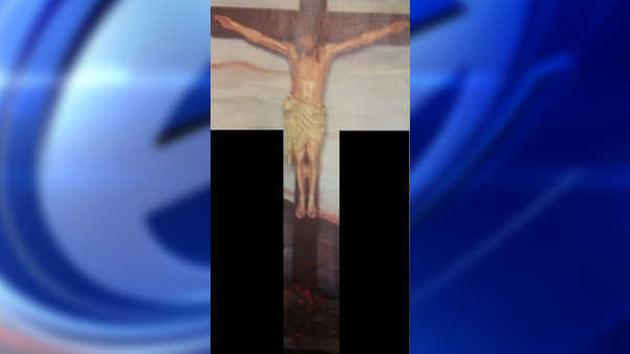 That a thief or thieves would come in while services were ongoing in the adjacent room in order to steal a life-sized crucifix is bizarre enough. Where the story gets really interesting is when you consider that the church’s namesake, Saint Anthony, is the patron saint of lost and — you guessed it — stolen items.

Catholics invoke St. Anthony’s help in locating lost or stolen items on the basis of an incident in which a book of psalms was returned to Anthony by a disgruntled student who had taken it after rejecting life in the Franciscan Order, according to the St. Anthony Shrine website.

As the story goes, Anthony’s prayers moved the thieving student to return his pilfered book. Prayers to Saint Anthony are believed to aid in the return of stolen and misplaced items in similar fashion.

The church has wisely opted, however, not to wait on Saint Anthony’s intervention and is instead relying on the assistance of law enforcement. ABC 7 reports that the “New York City Police Department is considering the theft grand larceny,” and advises anyone with information to call the crime stoppers hotline.