There are seven states which have laws banning atheists from holding public office. 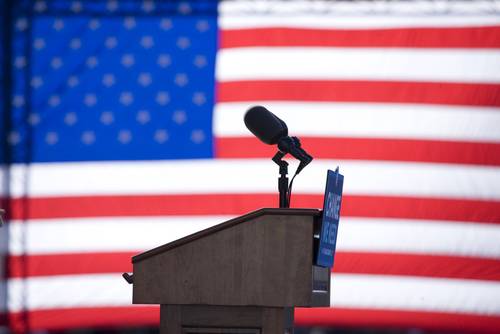 None of them are enforceable, thanks to the Supreme Court case Torcaso v. Watkins, but that’s what their constitutions say.

That no religious test ought ever to be required as a qualification for any office of profit or trust in this State, other than a declaration of belief in the existence of God; nor shall the Legislature prescribe any other oath of office than the oath prescribed by this Constitution.

No person who denies the being of a God shall hold any office in the civil departments of this State, nor be competent to testify as a witness in any Court.

No person who denies the existence of a Supreme Being shall hold any office in this state.

The following persons shall be disqualified for office: First, any person who shall deny the being of Almighty God.

No person who denies the existence of a Supreme Being shall hold any office under this Constitution.

In today’s New York Times, religion reporter Laurie Goodstein writes about how the Openly Secular campaign is calling for the repeal of these laws — even if they are irrelevant — for good reason:

Todd Stiefel, the chairman and primary funder of the Openly Secular coalition, said: “If it was on the books that Jews couldn’t hold public office, or that African-Americans or women couldn’t vote, that would be a no-brainer. You’d have politicians falling all over themselves to try to get it repealed. Even if it was still unenforceable, it would still be disgraceful and be removed. So why are we different?”

I’ve wondered the same thing myself.

The only argument in favor of keeping them in there is that they’re a very visible reminder of the kind of shit atheists have to deal with all the time. #NeverForget

It’s worth noting that even if the laws aren’t enforceable, that doesn’t always stop people from trying to enforce them…

The state bans have been invoked rarely since 1992, according to legal experts. In South Carolina that year, Herb Silverman, a math professor at the College of Charleston who is an atheist activist, was denied a position as a notary public. His case went to the South Carolina Supreme Court, and in 1997 he won. In North Carolina, after Cecil Bothwell, a writer, won a seat on the Asheville City Council in 2009, his opponents tried to invoke the State Constitution’s atheist ban to deny him his seat, but they soon backed down.

The most damning line in the whole piece came from a Republican official who challenged the atheists who wanted those constitutional provisions taken out:

Christopher B. Shank, the Republican minority whip in the Maryland Senate, said that while he believed in pluralism, “I think what they want is an affirmation that the people of the state of Maryland don’t care about the Christian faith, and that is a little offensive.”

This is typical conservative Christian mentality for you: Ask the government to stop treating atheists like shit and it’s automatically anti-Christian.

Constitutions never change easily, and even repealing these provisions would take a long time, but it’s a sign of how little atheists means to politicians that virtually none of them would ever even try.

December 7, 2014
All Religions Are Beautiful — None More Than the Faith in the Picture of the Horse
Next Post