Why We Can’t Be Sure If We Can Believe Yusuf Islam When He Sings “Peace Train” On His Current U.S. Tour December 5, 2014 Terry Firma

Why We Can’t Be Sure If We Can Believe Yusuf Islam When He Sings “Peace Train” On His Current U.S. Tour

Via the Huffington Post’s religion channel, we learn that the folk-pop artist formerly known as Cat Stevens is currently on a tour of the United States. What we inexplicably don’t pick up from the article is why Stevens, who has gone by Yusuf Islam since the late 1970s, is persona non grata among many people who care about free speech (the HuffPo just gives us some vague allusions to “dragon-sized myths” and “unsavory controversies”).

I’d like to correct that oversight. We’re going to have to time-travel back to 1989.

Only a week after Iran’s Ayatollah Khomeini issued an Islamic death sentence against Salman Rushdie for publishing the supposedly blasphemous novel The Satanic Verses, Stevens/Islam was asked about the affair.

Before an audience of London college students, he answered:

“[Rushdie] must be killed. The Qur’an makes it clear — if someone defames the prophet, then he must die.”

The next day, he walked back that statement by explaining that he had only meant to illustrate what the Qur’an says about blasphemers and apostates. Mr. Islam hadn’t personally advocated Rushdie’s execution, he said.

And at that point, he might still have deserved the benefit of the doubt (although why anyone would follow a religion with such barbaric, illiberal precepts remains, as always, an open question). 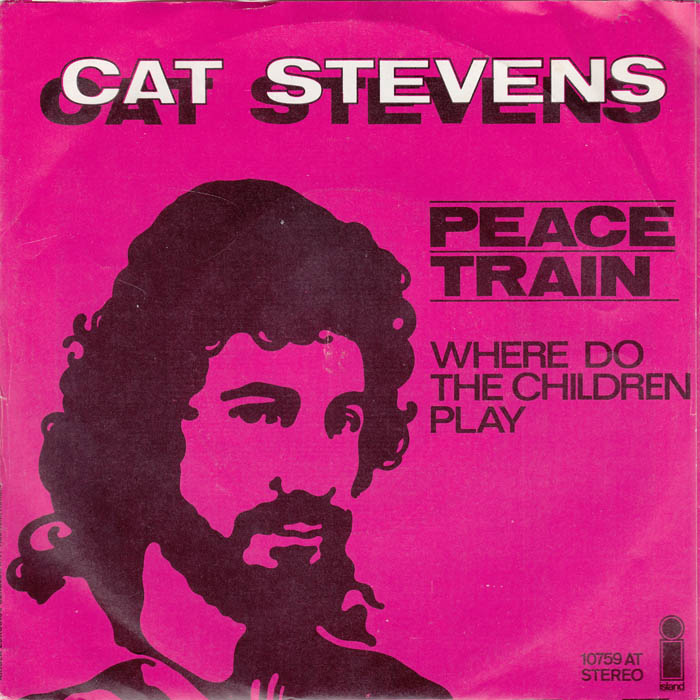 Two months later, however, Stevens/Islam was a guest on a British TV talk show, where he got into the following exchange with moderator Geoffrey Robertson:

Robertson: You don’t think that this man deserves to die?
Y. Islam: Who, Salman Rushdie?
Robertson: Yes.
Y. Islam: Yes, yes.
Robertson: And do you have a duty to be his executioner?
Y. Islam: Uh, no, not necessarily, unless we were in an Islamic state and I was ordered by a judge or by the authority to carry out such an act — perhaps, yes.

Within minutes, the conversation centered upon a hypothetical protest where an effigy of Rushdie was to be set ablaze.

Robertson: Would you be part of that protest, Yusuf Islam, would you go to a demonstration where you knew that an effigy was going to be burned?
Y. Islam: I would have hoped that it’d be the real thing.

He could’ve said that he would or wouldn’t attend such a demonstration, and either answer might have been defensible in my book. But instead, Mr. Islam went all-out, stating that rather than burning Salman Rushdie in effigy, he was hoping that he could attend (and perhaps participate in) the burning death of the actual man.

He’s also on record as saying this, on the same show:

[If Rushdie turned up at my doorstep looking for help] I might ring somebody who might do more damage to him than he would like. I’d try to phone the Ayatollah Khomeini and tell him exactly where this man is.

As far as I know, Stevens/Islam has never apologized for those statements (although he insisted afterwards he was just trying to be funny). He may regret them, but, I suspect, only because they have followed him ever since.

How hard would it be to say something like this: “I made some awful comments that were gross and indefensible. After much pained reflection, I repudiate what I said, and I ask the forgiveness of my fans, as well as the forgiveness of Mr. Rushdie, who shouldn’t have to fear for his life from anyone acting on Mr. Khomeini’s behalf or on mine.”

It took me less than a minute to write that. Stevens/Islam hasn’t come up with anything close in 25 years.

What he did offer was this milquetoast response in a 2000 Rolling Stone interview:

At a lecture, back in 1989, I was asked a question about blasphemy according to Islamic Law, I simply repeated the legal view according to my limited knowledge of the Scriptural texts, based directly on historical commentaries of the Qur’an. The next day the newspaper headlines read, “Cat Says, Kill Rushdie.” I was abhorred, but what could I do? I was a new Muslim.

That’s obviously disingenuous. First of all, Stevens/Islam wasn’t, by any stretch, a “new Muslim” when he made his comment. He had converted a dozen years earlier, after reading the Qur’an that someone had gifted him. Twelve years is plenty of time to acquire more than a passing familiarity with the central texts of one’s faith.

And secondly, you don’t have to parrot your holy book in seemingly approving tones if you fundamentally disagree with the part you’re quoting. It’s not only OK to add that you disavow the Qur’anic command of death for blasphemers; it’s incumbent upon you to renounce the command if you don’t want to be seen as a shitty and possibly dangerous individual.

If Stevens’/Islam’s immoderate, intolerant opinions were a one-time transgression that occurred during, let’s say, an alcoholic haze, or during a high-stress time in which he wasn’t himself, 25 years would be sufficient to forgive him and move on.

As it is, the damning things he’s said span a good number of years.

In 2010, the Observer‘s Andrew Anthony relayed:

He told me in 1997, eight years after saying on TV that Rushdie should be lynched, that he was in favor of stoning women to death for adultery. He also reconfirmed his position on Rushdie. He set up the Islamia school in Brent, which is currently undergoing council-backed expansion. Its mission statement three years ago explicitly stated that its aim was to bring about the submission of the individual, the community and the world at large to Islam. For this aim it now receives state funding. It’s an incubator of the most bonkers religious extremism and segregation, and is particularly strong on the public erasure of women. Why do people go to such lengths to ignore these aspects of Yusuf Islam’s character and philosophy?”

Now I’ve been crying lately,
thinking about the world as it is
Why must we go on hating,
why can’t we live in bliss?

Yusuf seems to think all the wrongs were done by others. Journalists asked him loaded questions. His replies were misinterpreted. It was the [Rushdie] book, not the call for violence, that “destroyed the harmony between peoples and created an unnecessary international crisis”. At worst, his remarks were silly but they were dry English humor. …

It’s time he stopped singing the question [why can’t we live in bliss?] and answered it. He had an opportunity to stand for peace and tolerance when the need for such a voice was critical. Instead, when Geoffrey Robertson asked the question, he found no room for tolerance or doubt, but with dogmatic certainty took the side of violence and tyranny.

Twenty-five years on, the fans who plunk down good money to see Yusuf Islam in concert still have reason to wonder whether the peace-promoting ex-hippie on the stage is the real deal, or something of an impostor.

December 5, 2014
The Rich Get Richer: Vatican Announces Discovery of Hundreds of Millions of Euros That Were "Tucked Away"
Next Post