On Wednesday, less than eight hours before Texas inmate Scott Panetti was to die by lethal injection, the 5th Circuit Court of Appeals granted him a reprieve. Panetti is on death row for killing his estranged wife’s parents in 1992.

His lawyers argued that he was too mentally ill to qualify for capital punishment, and they sought the delay so Panetti could undergo new competency tests. They noted that he acted as his own attorney during trial — dressed in a purple cowboy outfit — and tried to subpoena more than 200 witnesses, including the pope and Jesus Christ. …

The Hayward, Wisconsin, native had been diagnosed with schizophrenia in 1978, and had been hospitalized more than a dozen times for treatment in the decade before the shootings. At his trial, he took on an alternate personality, “Sarge,” to testify.

The article makes mention of Panetti’s religion, but not the prosecutors’. It doesn’t take a great leap of faith to surmise that, like the convict, they’re Christians — perhaps even the pro-life kind. 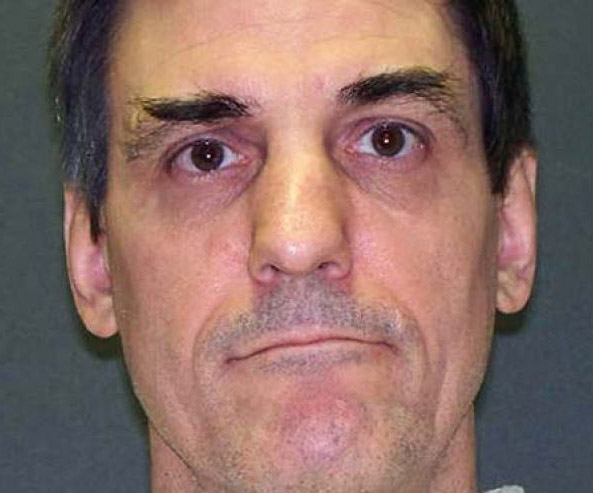 In any case, they want to put a man with a mental disability to death despite the Supreme Court ruling that says mentally ill people may not be executed if they don’t have a “factual and rational” understanding of why they’re being punished.

As we’ve seen, the line between acceptable religious beliefs and mental illness is not always easy to draw.

Panetti has insisted Satan is working through Texas prison officials to execute him to keep him from preaching the Gospel.

Panetti’s lawyers said that he hasn’t had a mental-competency evaluation since 2007,

“[W]e believe that today’s ruling is the first step in a process which will clearly demonstrate that Mr. Panetti is too severely mentally ill to be executed.”

In Texas, that can be an impossibly high bar, as the Guardian reminds us with reference to triple murderer Andre Thomas.

Nearly two decades after the U.S. Supreme Court outlawed the execution of severely mentally ill people, Andre Thomas was placed on Texas death row for killing his estranged wife, his four-year-old son and his one-year-old stepdaughter while carrying out what he believed was an order from God to exorcise their demons.

He cut out his children’s hearts and part of his wife’s lung then tried to stab himself to death. When that failed he put the organs in his pocket and walked home. Reading the Bible in prison a few days later, he came across a passage from Matthew: “If thy right eye offend thee, pluck it out.” He gouged out his right eye.

Diagnosed with paranoid schizophrenia, he was subsequently treated and deemed fit to stand trial two months later. In court, prosecutors argued that his violent behaviour was explained by drink and drugs while clawing out his eye was simply a moment of madness. In 2005, a jury gave him the death penalty.

… blinding himself for good.

The following year, in rejecting an appeal, a judge with the Texas court of criminal appeals wrote: “This is a sad case. [Thomas] is clearly ‘crazy’ but he is also ‘sane’ under Texas law.”

Like Panetti, Thomas is still alive, but not for lack of God-fearing folks in the D.A.’s office and prison system who want to see these admittedly violent mental patients executed sooner rather than later.

December 5, 2014 Texas School District Allows Bible Giveaways After School, but Will They Allow Muslim or Satanist Distributions?
"My state in the news ... AGAIN!I'm pretty sure we're #1 here on Friendly Atheist. ..."
Aloha OK Lawmakers Want to Spend $85,500 ..."
"Even if they were spending their own money -- okay, stop laughing -- I'd be ..."
Jay Quintana OK Lawmakers Want to Spend $85,500 ..."
"Or, their 'morals' don't amount to a dung heap."
ORAXX AL Sen. Tommy Tuberville Foolishly Wants ..."
"Then try to explain the word "divine" which you use. Thanks in advance."
enoch arden A Prominent Creationist Has Died. His ..."
Browse Our Archives
What Are Your Thoughts?leave a comment