Bill Donohue of the Catholic League loves to complain about all the persecution people of his faith have to deal with — for example, other people sometimes put up billboards that offer a different persepctive — but he has no problem saying the very things he’s flip out over if the tables were turned. 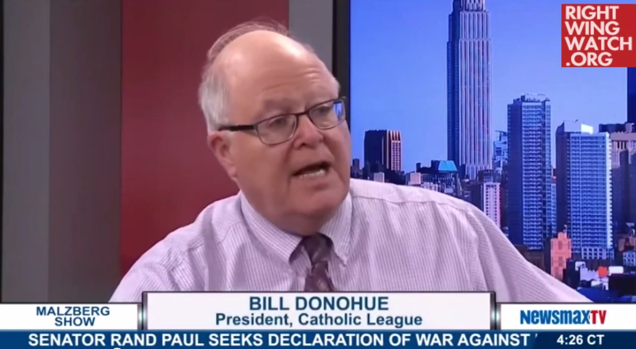 [Atheists] believe that freedom is license to do whatever you want… They don’t want to be told anything, which is why they die prematurely, they’re unhappy. That’s why we have a disproportionate number of agnostics and atheists in the asylum. All of this is true.

[“Secularists” have] got to work it out… I’ll help pay for their therapy. Just keep your hands, your mitts, off the Catholics during Christmas.

Donohue added that he was only talking about the “militant” atheists… like the folks at American Atheists who behead Christians put up billboards.

He also complained about how AA’s conference is on Good Friday (and Easter), as if that’s a sign that they hate Christians.

He never considers the possibility that hotels tend to be available for conferences on holiday weekends… and atheists are probably free to travel since they don’t have to go to church.

This is the same guy who once compared atheists to neo-Nazis and Klan members.

But let’s get to the heart of his statements.

Are atheists more likely to die young? In some studies, yes.

In all of these cases, though, Donohue purposely ignores the elephant in the room: None of these things happen because people are atheists. It has everything to do with the social aspects of it.

Atheism correlates with all those awful things because religious people tend to have things like stronger communities and more hope (albeit false hope) and people to turn to when they’re depressed. Atheists have to essentially fend for themselves or create alternatives that are nowhere near the scope or size of what religions provide.

Similarly, when atheists speak about their beliefs publicly, it’s usually in response to events that make us upset or angry — so we come off as more defensive (i.e. unhappy). Christians, on the other hand, tend to talk about their relationship with God when they’re writing blog posts or books. (These are huge generalizations, of course, but you get the idea.)

So back to the point: Donohue is doing what he does best: Lying to make himself look better. He takes general pieces of information, siphons off all the necessary nuance, and pretends that the evidence suggests atheists are inherently immoral, unhappy, and insane.

And Steve Malzberg, instead of pushing back, just irresponsibly laughed it off.