Beginning in the last week of November, a series of ads focused on public funding for Catholic religious schools showed up in Winnipeg bus shelters. The ad campaign, deliberately distributed mainly in the vicinity of the Canadian Museum for Human Rights to target its visitors with food for thought, has been financed and assembled by OneSchoolSystem.org, an Ottawa-based advocacy group.

The four ads appearing in Winnipeg are as follows: 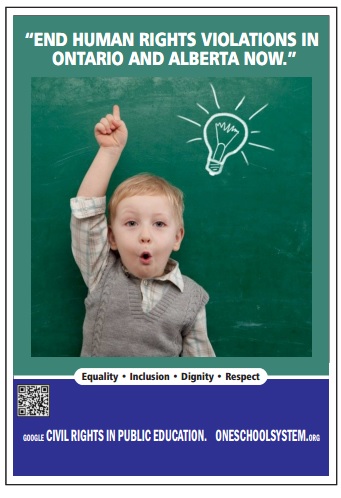 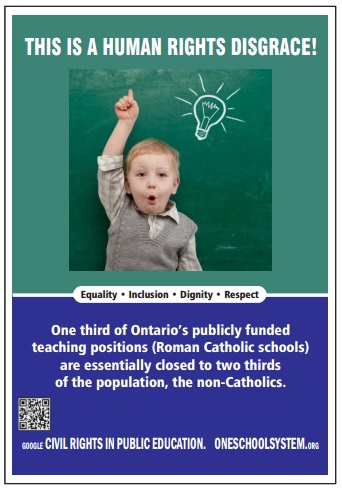 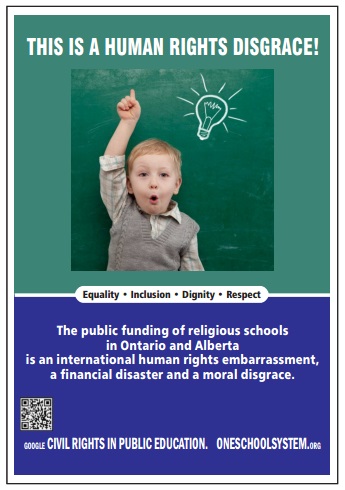 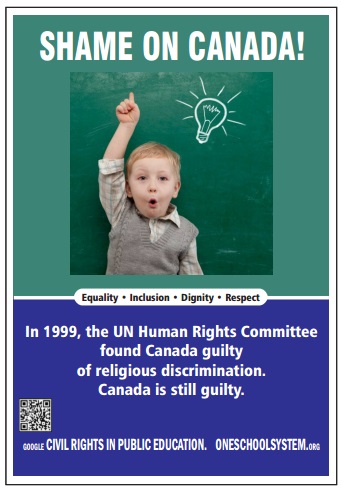 Okay, so they’re not exactly showcasing Canadian diversity or practicing the inclusion they preach. Nonetheless, they make a valid point: why is government funding used to finance an exclusionary system that propagates religious dogma and doctrine? Canadians generally pride themselves on having a just and tolerant society: after all, we’re so polite and nice! Scratch the surface, though, and you’ll find some nasty discrimination that’s well worth talking about.

The ads have been installed in Winnipeg bus shelters by Outfront Media, formerly known as CBS Outdoor… but they’re not the first company One School System approached. Originally, the ads were submitted to Pattison Outdoor, which refused to accept them. Dr. Richard Thain, speaking on behalf of One School System and its ad campaign, explained that the company cited violations of the Canadian Code of Advertising Standards as a reason to decline the ads. However, he added, “Pattison Outdoor has never told me which words or phrases they thought violated the Ad Council code.”

He went on to say:

It is embarrassing and disgraceful to be told by the UN Human Rights Committee that Canada/Ontario is guilty of religious discrimination. Hopefully these ads will encourage others to speak out and join the growing number of Canadians who think it is time for our government to treat all citizens equally… It is shocking that Pattison Outdoor arbitrarily denied my right to express my view on the one-school-system concept, a view that has been expressed numerous times in editorials and opinion pieces in newspapers across Ontario in recent months. I am presently considering my legal options.

Thain refers to the United Nations Human Rights Committee’s 1999 ruling that Ontario was practicing religious descrimination by funding Catholic education while refusing to fund religious education for other groups. While the ruling holds Canada at large to account, any practical response to the ruling must be made at the pronvicial level. While the roots of government-funded Catholic education go back to the original Canadian Constitution of 1867, many Canadians feel that the system has outlived its usefulness.

Thain expressed gratitude towards Outfront Media, characterizing them as people “who understand the fundamental principle of freedom of expression and have enabled me to express this view.”

Anyone interested in the group’s advocacy efforts can visit OneSchoolSystem.org to learn more or offer support.

December 4, 2014
A New Study Shows Americans May Not Be As Confident in Creationism, but There's Still Reason to Worry
Next Post