In Fayetteville, Arkansas, a civil rights ordinance has brought out some people’s least civil sides.

Chapter 119 of the city code is a measure that protects people from discrimination on the basis of race, religion, gender identity and sexual orientation. In Fayetteville’s upcoming special election, voters will have a chance to repeal the ordinance (because why wouldn’t they hold an election just to strike down a pro-equality law?), and a few brave Arkansans are stepping forward to support the law staying put. Early voting on the measure began Tuesday.

In a true example of how classy the anti-gay activists are, a Fayetteville man found the word “FAG” spray-painted over the sign in his yard promoting the anti-discrimination bill. Other signs have reportedly been stolen and otherwise destroyed. 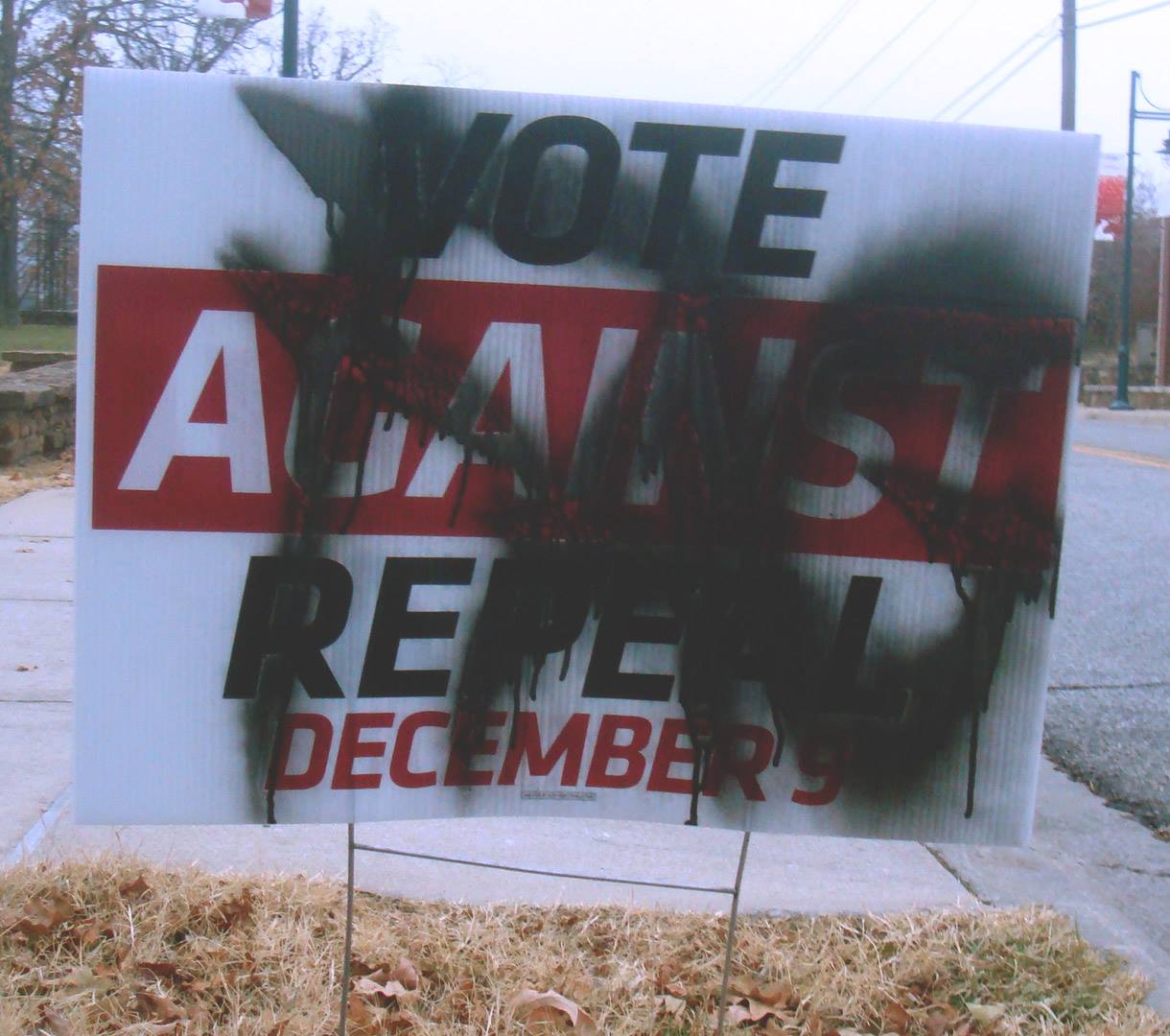 Police filed a report on the spray-painted sign as a criminal mischief misdemeanor but won’t be investigating because they lack evidence and suspects. It’s also been reported that no officers were dispatched to photograph the vandalized sign.

“I saw the vandalism with my family this morning. I have very young children and now I have to explain to my kids why there is hate scribbled across a sign encouraging inclusion,” Michelle Bell, Fayetteville student and resident said. “I get to tell my kids that if they grow up and are LGBT we might no longer belong to a place that will accept who they are. My family moved to Fayetteville because it was a place of acceptance. I am going to keep fighting to keep Fayetteville fair.”

What’s more: The anti-gay group has chosen a website domain conveniently similar to that of the other side, tricking people into finding their stuff. More specifically, fairfayetteville.com leads you to the campaign for tolerance and equality, while keepfayettevillefair.com is the hatemongering pro-repeal site. It redirects to repeal119.com, which tells constituents:

Even with multiple amendments, this ordinance attacks rights guaranteed to us by the Constitution of the United States as well as the Arkansas Constitution. This ordinance also creates an environment where sexual predators can use the cover of an anti-discrimination law to enter previously gender-private areas causing a major public safety risk.  Finally, the new regulations also put businesses in danger of being criminally charged for the complaints of a disgruntled employee.  While some intentions of the ordinance may be good, this law is bad for safety, bad for business, and bad for our individual freedoms.

The repeal campaign is also soliciting donations — probably for more spray paint or something? Sleazy as it gets.

December 4, 2014 Radical Islam Makes Most of Its Victims Among Other Muslims; Female Nigerian Bombers Offer the Latest Example
Browse Our Archives
What Are Your Thoughts?leave a comment