A New Study Shows Americans May Not Be As Confident in Creationism, but There’s Still Reason to Worry December 4, 2014 Hemant Mehta

A New Study Shows Americans May Not Be As Confident in Creationism, but There’s Still Reason to Worry 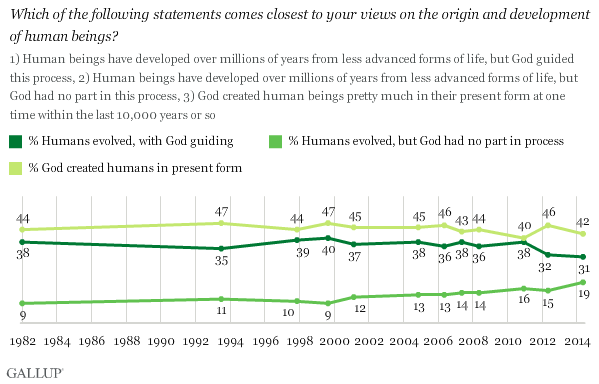 The numbers have been more or less like this for a few decades, as you can see, with only minor fluctuations.

But a new study put out by Dr. Jonathan Hill of Calvin College (a religious school) with the help of the BioLogos Foundation (which seeks to reconcile science and religion) sought to go into more depth about what people actually believe.

Slate‘s William Saletan summarized the findings and writes that, while Creationism is still pervasive in our culture, not everyone is of the Ken Ham variety. In fact, only about 15% of Americans would agree with him and say they’re absolutely or very certain God created us in our present form over the last 10,000 years. 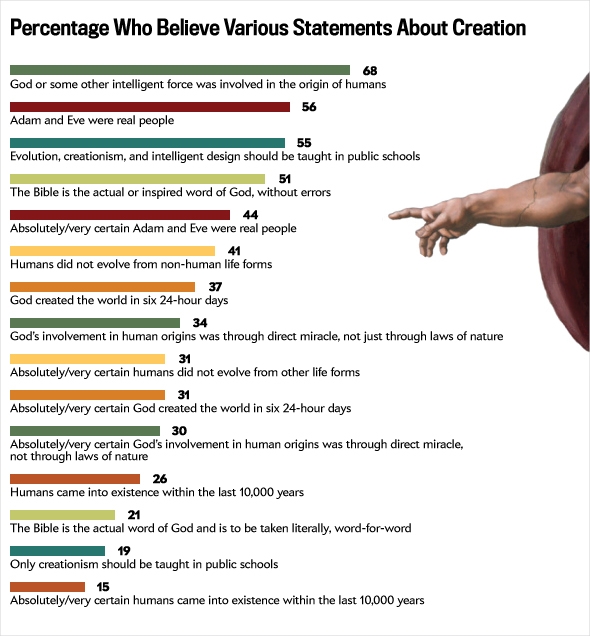 That might sound nice, but in a more scientifically literate society, every one of those bars would look more like this: 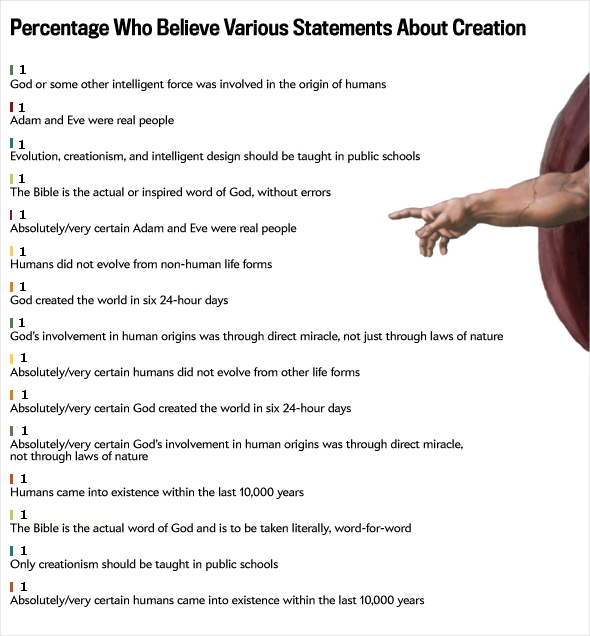 Still, Saletan says, there’s reason to be optimistic. For example:

The next most popular statement was that “Adam and Eve, the first humans according to the Bible, were real, historical people.” Fifty-six percent of respondents affirmed this statement. But when they were pressed, only 44 percent said they were absolutely or very certain about it. A majority became a minority.

My concern, though, isn’t that less than half of people are pretty damn certain Adam and Eve existed. It’s that most Americans still harbor delusions that they existed at all, even if they’re not confident about it.

This is the pretty much the case down the line. There’s no reason for me to think things are getting any better, even if there may be silver linings everywhere.

What about teaching science in science class? Once again, look at Saletan’s summary:

Those 55% may be pluralists… but they clearly have a gross misunderstanding of what constitutes science. In their world, any popular theory should be taught in the classroom regardless of how much evidence there is for it.

That’s the bigger problem here. That’s what the problem always has been. It’s not just that there are way too many Creationists out there. It’s that even people who aren’t Young Earth Creationists think there’s some validity to those beliefs, and they have no problem with those beliefs being taught in school.

This is why other countries laugh at us when it comes to science education. What’s obvious to everyone else is still in doubt in large parts of America.

Even if only 15% of Americans are bottom-of-the-barrel Creationists, there are plenty more — still a majority of Americans — whose views have nothing in common with where the evidence leads. There’s little to be excited about to that end.