Think Progress’ Zack Ford has an article up reporting on new and bizarre comments made by Ugandan Parliament Speaker Rebecca Kadaga (below). 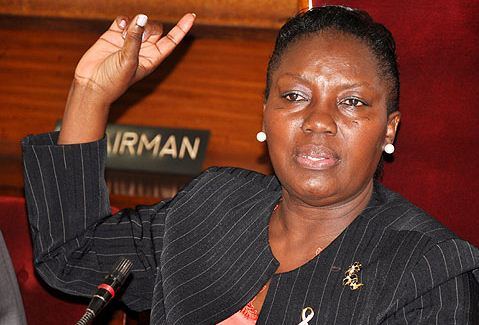 Kadaga is an outspoken opponent of gay rights, championing the infamous Anti-Homosexuality Bill (dubbed the “Kill the Gays” bill by opponents, as its first version decreed a death penalty for homosexuality). The milder version (that passed) implemented a life-in-prison sentence for homosexuality. Uganda’s Constitutional Court overturned the law earlier this year on the grounds that its passage violated parliamentary procedure, but legislators are considering a new version.

Speaking this past Sunday of the alleged dangers of gay rights activists, Kadaga issued some bizarre warnings.

“Be very careful because gays are here to distort our heritage,” she told clergy gathered for Golden Jubilee celebrations at St. Stephen’s Church in Pajwenda on Sunday. “We have discovered that they adopt our children and confine them in gay communities abroad to train them on gay practices. By the time they come back home, they are already influenced by homosexuality and are used to influence others in the community.”

Kadaga repeats two refrains that are all too common in America — that gay people prey upon children, and that homosexuality is a learned behavior. (This is probably less of a coincidence than it might seem, as American pastors and homophobic fundamentalists have been hard at work for over a decade exporting American fundamentalist bigotry against gays to Uganda and other nations.) It was not the only paranoid bit of homophobia the Parliament Speaker had to offer, however.

Kadaga also warned that computers and books donated to Uganda schools include software and literature that promote homosexuality.

Apparently, not content merely to terrorize, marginalize, and criminalize Uganda’s gay population, Kadaga wants to protect Ugandan school children from the dangers of gay software… by stoking fears that computers and books are going to recruit kids into homosexuality. Which will doubtless have the impact of limiting children’s educational opportunities by depriving them of these crucial resources, and of course doing nothing whatever to turn gay kids straight.

Ugandans have cause to be wary, alright, but not because of foreign gay parents or computers — rather, because of theocratic politicians who put their belief system above the interests of their constituents, gay and straight.

December 3, 2014
There Will Be a Satanic Display in Florida's Capitol Building This Holiday Season
Next Post