The Salvation Army loves serving the son of God. Other sons, not so much.

The Johnson City Salvation Army… turned away a homeless family with a teenage son on a cold night earlier this month, all because of the boy’s age.

Tim Lejeune says on one of the coldest nights of the year [temperature 18ºF], despite the organization’s white flag waving outside the shelter [a symbol that all are welcome], the Salvation Army turned his family away, because his son is 15 years old.

Lejeune says his wife, their 15 year-old son, 16 year-old daughter and five year-old son, all down on their luck, have been living in their car for the last several weeks.

Thanks to the charitable offer of a local motel, the Lejeunes found free temporary lodging, and police officers who’d heard of the family’s predicament pooled their own money to buy groceries for them. 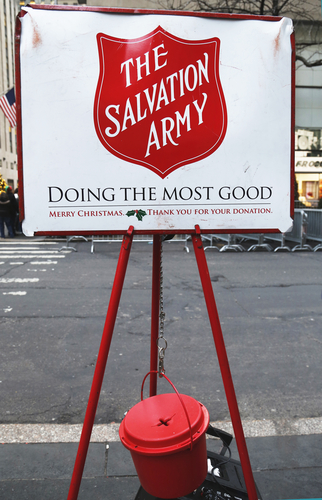 Salvation Army Captain Michael Cox says the organization has a longtime policy that prohibits boys ages 12 to 16 from staying at the shelter. According to Cox, the policy is in place for safety reasons; ultimately to protect children. Cox says space limitations at the shelter do not allow the building to house maturing boys. He says that policy has only been an issue once before in the last decade or so.

The soldiers for Christ did have enough heart to at least fill the Lejeunes’ gas tank,

… and even let them spend a couple nights at the shelter, but not because of any change of heart. Lejeune says their 15 year-old son is now receiving mental help at an area hospital. “He ended up having a breakdown and ended up at Woodridge and felt it was all his fault that we were homeless that we couldn’t go anywhere, because of him,” Lejeune said.

I find it hard to understand why a 15-year-old boy is an unacceptable client who may be sent back into the cold, whereas his five-year-old brother and 16-year-old sister are fine. Are the acceptable siblings in any way impervious to “perverts who want to do whatever”?

Stung by the bad publicity, the Salvation Army has announced it will take a fresh look at its shelter policy.