Dennis Prager: Without the Ten Commandments, Atheists Would Never Know Murder is Wrong

Conservative commentator Dennis Prager just launched a video series on the Ten Commandments… and if you listen to just the first 30 seconds, you’ll learn why you shouldn’t take this guy seriously.

He claims right off the bat that the Ten Commandments (which “changed the world for the better” moreso than any other document in world history) inspired western civilization, and that’s the reason we have things like women’s rights and no slavery.

(What’s that? The Bible has been used to deny women equal rights and defend slavery? Why don’t you just pour yourself a great big bowl of shut the hell up.) 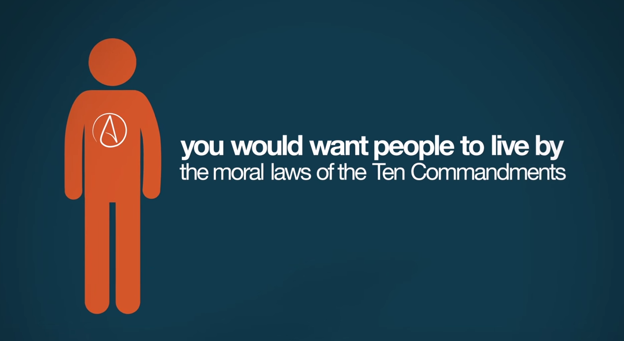 But seriously, how does Prager defend the Ten Commandments when most of them are completely irrelevant?

Well, first, the introduction video only talks about the two Commandments that really matter. Prager says the world would be so much better if there was no murder or theft. I don’t disagree with him… though it’s not like the creation of the Ten Commandments was the first time people ever thought, “Oh, you mean we’re NOT supposed to kill each other?! I never considered that option!”

Prager elaborates on this later by saying very directly, “If it isn’t God who declares murder wrong, murder isn’t wrong.”

Prager anticipates a rebuttal from atheists and says that, sure, atheists may indeed believe murder is wrong, but they don’t know it’s wrong unless God tells them so.

God, who killed approximately 25,000,000 people. He’s the guy we should look to for advice on how to be moral.

Prager needs to be told that murder is wrong. In his mind, if there aren’t moral absolutes, anything goes… which is ridiculous. You don’t need a Divine Rulebook to come to a consensus on basic moral ideas. Why would atheists not want to kill for reasons beyond “it’s wrong”? Here are a few that come to mind: Because it destroys societies. Because a world where people are allowed to murder others is one where we’re so focused on survival that we can’t concentrate on anything else. Because we’re all better off following the Golden Rule.

And then he rolls out the tired old trope about Communists and Nazis killing millions of people because… atheism.

Prager’s final lines are all about how no one has ever come up with a better moral code for society (“and no one ever will”).

It’s amazing, isn’t it, that the finest moral code ever seen left “Thou shalt not own slaves” off the list? And “Don’t molest children.” And “Stop oppressing people with different sexual orientations.” And all those other crimes that religious people commit that Prager seems to ignore because God didn’t explicitly say otherwise.

Did I mention this is first video in a series? Can’t wait to see how he defends the first Commandment on the list…

December 3, 2014 Bet You Missed This Funny Biblical Message in the Latest Episode of The Walking Dead
Browse Our Archives
What Are Your Thoughts?leave a comment