Life After Westboro Baptist Church Has Been Tough for This Defector December 2, 2014 Hemant Mehta

Life After Westboro Baptist Church Has Been Tough for This Defector

Earlier this year, Zach Phelps-Roper, grandson of Westboro Baptist Church founder Fred Phelps, left the church, making him the fourth of his ten siblings to walk away from the anti-gay hate group. 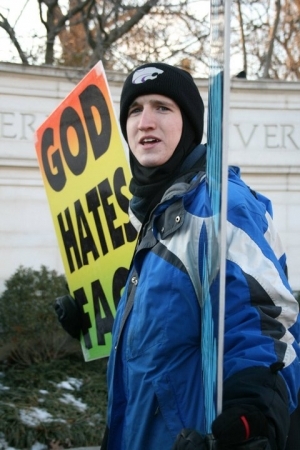 Mike Spies at Vocativ spent time with Zach to see how he’s doing and what he’s been going through over the past year:

After leaving the church, Zach went through long bouts of depression. He had difficulty sleeping and briefly contemplated suicide. “I felt like my life had no purpose,” he says. He waited several months before publicly announcing his departure from Westboro, and through Facebook and Twitter he started to receive occasional messages of support from strangers, including a mental health nurse in her 40s. She encouraged him to rethink his interpretation of the Bible, but Zach was initially resistant, still fearing for the fate of his soul. The nurse, however, was a patient teacher, and pushed him to challenge his fixed ideas. “I remembered the quote, ‘No peace for the wicked,’” he tells me. “I realized I was actually starting to find peace, even though Westboro would say I was wicked. I realized, OK, Westboro was literally wrong.”

The ending is just heartbreaking. Give it a read.