Every five years, the Hindu goddess Gadhimai works up quite the bloody appetite. In Nepal, besotted believers sacrifice goats, pigs, buffalo, and roosters to her. Accompanied by their animals, they undertake a twice-a-decade pilgrimage to Gadhimai’s temple in the south of the country. Many participants are from neighboring India. CNN describes the festival as “the biggest religious slaughter in the world.”

“From my village everyone has made a vow [to offer animals],” says Kushwaha from Bariyarpur, a community in Bara district about 60 miles south of Kathmandu. Some, he explains, are glad they have got a son or a daughter, others that a different form of good fortune has befallen them.

The ritual sacrifice of goats, buffaloes and roosters in temples and at home is widespread in Nepal where 80 percent of the population are Hindu. Some five million people from adjoining districts — and also from the bordering Indian states of Bihar and Uttar Pradesh — will attend the festival, according to local authorities, although only two days are dedicated to the sacrificial ritual itself.

The slaughter follows a set pattern: on Friday male water buffalo calves are killed while on Saturday attentions switches to goats. Officials estimate that up to 10,000 buffalo calves and 150,000 goats will be offered to Gadhimai — the goddess of power — during the ritual. 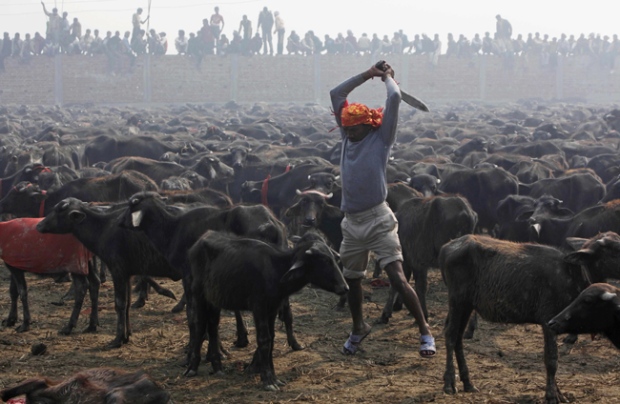 The bloody event got its start after

… Bhagwan Chaudhary, the feudal landlord, [was] imprisoned in Makwanpur fort prison about 260 years ago. He dreamed that all his problems would be solved if he made a blood sacrifice to Gadhimai. Immediately upon his release from prison he took counsel from the local village healer whose descendant, Dukha Kachadiya, started the ritual … with drops of his own blood from five parts of his body. Apparently then a light “appeared” in an earthenware jar, and the gory sacrifice began.

With some success, animal-rights groups have been trying to curtail the slaughter. Five years ago, the bloodshed was even more extensive: almost 20,000 buffalo calves were killed, along with more than 200,000 goats.

“We object to the cruelty with which animals are treated,” says Pramada Shah of Animal Welfare Network Nepal. “There is random hacking of animals in open space. Not all animals have their heads chopped off. Some take up to 40 minutes to die.”

Though the slaughter is in violation of existing health laws, no official crackdowns ever occur. Said one source:

If we tell the people to stop the sacrifices, they will come to kill us. This is something related to people’s religion and faith.”

Things we must evidently respect.

December 1, 2014 Atheist Billboards in Religious Cities Say: "Dear Santa, All I Want for Christmas is to Skip Church!"
Browse Our Archives
What Are Your Thoughts?leave a comment