Pulitzer Prize-winning Poet Laureate Mark Strand (below) died on Saturday at the age of 80: 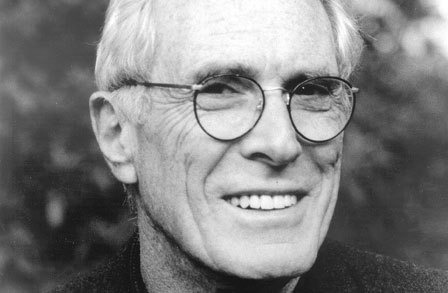 Even if you weren’t familiar with his work, the obituaries about him mention how seriously he took his atheism:

The most profound absence in his work was that of God, his atheism passed down to him from his father, who had terrified his young son with stories of heretics burned at the stake. In “Poem After the Last Seven Words,” from his 2006 collection “Man and Camel,” Strand imagined how it felt “to open the dictionary of the Beyond and discover what one suspected, that the only word in it is nothing.”

“I haven’t met God and I haven’t been to heaven, so I’m skeptical,” he told the AP. “Nobody’s come back to me to tell me they’re having a great time in heaven and that they’ve seen God, although there are a lot of people claiming that God is telling them what to do. I have no idea how God talks to them. Maybe they’re getting secret emails.”

Actually, God did appear in at least one of his poems, but not in a flattering way:

In 1980’s Selected Poems, Strand relies on an “ethereal, cumulative effect” to express the idea that “the two fixed points of a man’s life are the self and God; both are darknesses, one leading to another”…

What’s clear through his poetry, though, is that he didn’t have to talk about religion to raise serious questions about our lives and what brings us meaning:

“He is not a religious poet on the face of it, but he fits into a long tradition of meditation and contemplation,” said David Kirby, the author of “Mark Strand and the Poet’s Place in Contemporary Culture” and a professor of English at Florida State University. “He makes you see how trivial the things of this world are, and how expansive the self is, once you unhook it from flat-screen TVs and iPhones.” Reading Mr. Strand, he said, “We learn what a big party solitude is.”

Here’s hoping his legacy is a long-lasting one.