Atheist Billboards in Religious Cities Say: “Dear Santa, All I Want for Christmas is to Skip Church!” December 1, 2014 Hemant Mehta

Atheist Billboards in Religious Cities Say: “Dear Santa, All I Want for Christmas is to Skip Church!”

A new billboard campaign from American Atheists shows a little girl writing a letter with the (very blunt) message: “Dear Santa, All I want for Christmas is to skip church! I’m too old for fairy tales.”

“Even children know churches spew absurdity, which is why they don’t want to attend services. Enjoy the time with your family and friends instead,” said American Atheists President David Silverman. “Today’s adults have no obligation to pretend to believe the lies their parents believed. It’s OK to admit that your parents were wrong about God, and it’s definitely OK to tell your children the truth.”

Well, the billboards are a lot cheaper in residential areas than in Times Square, too, and I’m sure that was a consideration.

For the billboards to make sense, though, you have to let a couple of things slide.

Like: if the girl is too old for fairy tales, then why is she writing to Santa Claus…?

And does it really makes sense for a budding atheist to be celebrating Christmas?

I’m sure no one will notice.

Interestingly enough, one of the billboards AA wanted to put up in Jackson, Mississippi was rejected by multiple vendors because of the content:

“The fact that billboard companies would turn away business because they are so concerned about the reaction by the community to a simple message that not everyone goes to church and not everyone believes in gods shows just how much education and activism on behalf of atheists is needed in the South,” said Public Relations Director Danielle Muscato.

The billboards, which also serve as promotion for AA’s upcoming conference in Memphis, will be up through Christmas Eve.

In case you need a reminder of AA’s previous holiday billboards, last year, they had a 15-second digital billboard in Times Square with the main message reading: “Who needs Christ during Christmas? Nobody.” 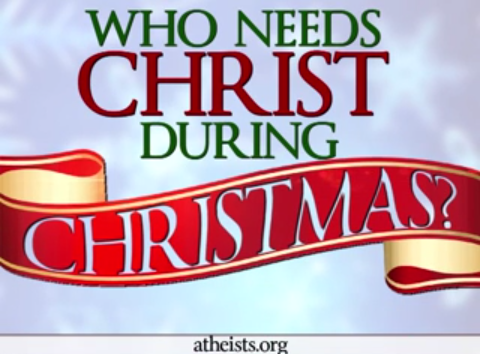 In 2012, they had a monster ad in Times Square saying “Keep the merry! Dump the myth!”

In 2011, they had two different digital billboards near the foot of the Lincoln Tunnel:

And in 2010, they began their holiday advertising campaign with a message reading “You KNOW it’s a Myth”: