If you look at the very top of that logo, you’ll notice a tiny cross, which is there for a reason:

The symbol holds significance in the history of Real Madrid as it signifies the team’s relationship with Spain’s royal family. The symbol was introduced in the 1920s as part of the emblem of the Spanish crown, when the club was given the title Real (Royal) by King Alfonso XIII and represented the Spanish royal house.

But now that the team is doing business with the National Bank of Abu Dhabi, a major bank in the Muslim-majority United Arab Emirates, they’re making a slight change to the logo… 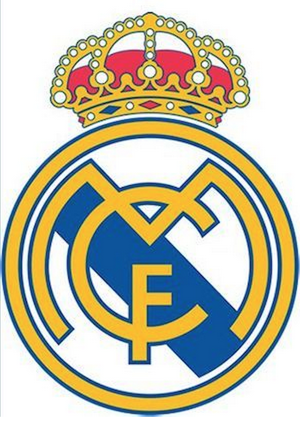 A new National Bank of Abu Dhabi credit card that doubles as a Real Madrid membership card shows the new crest without its cross.

Florentino Perez said in September that “our links with the UAE are constantly growing stronger. This agreement will help the club to keep conquering the hearts of followers in the United Arab Emirates.”

The Spanish sports newspaper Marca adds: “And from the looks of things, the club is willing to compromise on aspects of its identity in pursuit of these new fans.”

To be fair, the club doesn’t really have any religious ties, so it’s not like dropping the cross in their logo is necessarily the same thing as hiding their faith for the sake of money. They are first and foremost a business, and this is a practical decision. The rebuke, if you want to call it that, isn’t even against Christ; it’s against the Spanish royal family… and as far as I can tell, they haven’t complained one bit.

I also suspect some of the people feigning outrage over this didn’t even know the cross was in the logo until just now.

November 29, 2014
Hope Your Thanksgiving Dinner Was Better Than This...
Next Post

November 29, 2014Exodus: Gods and Kings Star Christian Bale Speaks of the "Sadistic in the Extreme" Details of Moses' Story
Browse Our Archives
What Are Your Thoughts?leave a comment