Ready to Supersize Your Salvation? How About a McMass? November 28, 2014 Rachel Ford

Ready to Supersize Your Salvation? How About a McMass?

In what is either brilliant parody or desperate marketing (or quite possibly a mix of the two), Lux Dei design is promoting a new church that combines McDonalds with, well, Jesus. 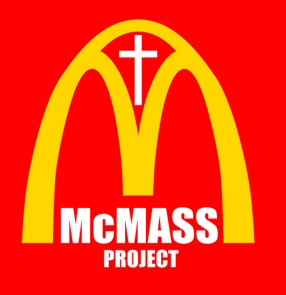 A group of three friends calling themselves “The McMass Project” has launched an IndieGoGo page trying to raise $1 million to build a McDonald’s franchise in a church, possibly in New Jersey or the Philadelphia area.

Churches are community centers, but need to attract people and support themselves financially. McDonald’s are profitable, and draw constant crowds, but need great, centrally-located, spaces.

Together, a McDonald’s Church will support itself and become increasingly active in its community.

Based on this foolproof business plan, the McMass project is soliciting donations. Like I said, it reads like parody. But group creative director Paul Di Lucca insists that it’s very serious:

“Christianity is unable to capture modern audiences,” he argues. And, as the project’s website states, McDonald’s restaurants “bring communities together.”

McMass, on the other hand, doesn’t seem to be uniting folks as the creators had hoped. As of this writing, the project has amassed only $105 in support. It runs until mid-January, though, so unless the group turns up a McMiracle, it might awhile before you can get value menu theology with your Big Mac.

November 28, 2014
German Pastafarians Now Have Official Signs Directing People to the Nearest Church of the Flying Spaghetti Monster
Next Post