You May Think Their Actions Are Un-Islamic, but It Doesn’t Mean They Aren’t Muslims November 27, 2014 Hemant Mehta

You May Think Their Actions Are Un-Islamic, but It Doesn’t Mean They Aren’t Muslims

This is a guest post by Lala Stone. She also writes at Medium and Alternet.

Mass murderer Anders Breivik — the man who killed 77 people in Norway in July of 2011 — made it extremely clear what his religion is in his 1,500 page manifesto.

“At the age of 15 I chose to be baptised and confirmed in the Norwegian State Church,” he wrote. “I consider myself to be 100% Christian.”

Bill O’Reilly was not convinced. 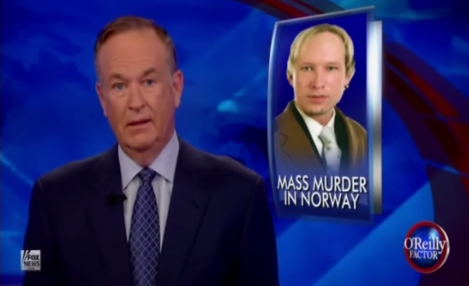 “Breivik is not a Christian. That’s impossible,” he said on Fox News a few days after the murders. “No one believing in Jesus commits mass murder. The man might have called himself a Christian on the net, but he is certainly not of that faith.”

Christians are often quick to kick people out of their tribe, to say fundamentalists are not “true Christians.” Of course, this is just a version of the “no true Scotsman” argument. Instead of admitting that some members of your group have objectionable characteristics, you just redefine the group so it excludes the undesirables. O’Reilly didn’t ask if there was something within Christian teachings that might have contributed to Breivik’s crimes. He didn’t wonder how a Christian could have done something so terrible. O’Reilly just dismissed him as not a Christian at all, despite Breivik’s statements to the contrary.

Muslims often take a different route and aren’t as quick to exclude extremists from their religion — and this slight distinction makes for a big difference in how to combat it. A few of the Facebook comments for Terry Firma‘s recent post said that ISIS is not “Islamic,” which is a shade different from saying they are not real Muslims. Instead, they’re essentially saying “you got Islam wrong.” By not denying the faith of the violent extremists, the Muslims saying this not only avoid the No true Scotsman fallacy, they also don’t rule out the possibility of dialogue with extremists. And, as an added benefit, they make it a bit easier for moderate Muslims to reach out to young people who may be influenced by extremists because they’re still connected by the Muslim label.

This is the point made by Shahed Amanullah, CEO of tech startup LaunchPosse and former Senior Advisor to the U.S. Department of State, where he worked on combating online extremism. When asked if terrorists should be considered Muslims, he agreed that they were.

“I disagree with their actions, but if they claim they are acting for Islam it’s kind of silly for me to say they aren’t,” he said. “I’m more interested in arguing with extremists as to why their interpretation is wrong. Saying they aren’t Muslims doesn’t help us convince them they are wrong.”

Imam Islam Mossaad, leader of the North Austin Muslim Community Center in Austin, Texas, had a similar answer when asked if the terrorists were “true Muslims.”

“They are Muslim. But they took certain things to an extreme which are unacceptable to the Prophet Muhammad, peace be upon him,” he said. “So they are Muslim, but they’re not applying Islam in the way that it should [be applied].”

Why don’t mainstream Muslims say that violent terrorists are not “real Muslims”? Muslim lecturer Tahir Wyatt, the first American to teach in Al Masjid-e-Nabawi (commonly known as the Prophet’s Mosque) in Medina, Saudi Arabia, said that arbitrary takfeer, or excommunication, is “widely viewed as the first theological heresy in Islam and, as such, is cautioned against by almost all Sunni scholars.”

But this doesn’t mean that it’s impossible to be booted from the faith.

“There are certain beliefs and acts that are considered to nullify one’s testimony of faith (shahada); however, violence and even murder — as evil as they are — are not necessarily considered from those acts, though they could be. And this is where it gets nuanced — and quite sticky.” Wyatt said.

He added that he is confident that most, if not all, mainstream Muslim scholars would agree that the terrorists are Muslims. Of course, this doesn’t equal approval of beheadings and other violence. Instead of excommunicating people, Muslim scholars try to understand how terrorists could interpret Islam in this way and how they can stop future violence in the name of Islam.

Akbar Muhammad, associate professor of history and Africana studies at Binghamton University in New York, talked to PBS about this issue for a Frontline story about Muslims in May of 2002. He was specifically referring to the terrorists responsible for the World Trade Center attacks.

“I think the Muslim world must understand what produces such persons. Muslims have to help Westerners understand that such person may not be acting in a widely accepted Islamic manner,” he said. “But at the same time, Muslims need to try to understand such persons against a large corpus of Islamic writings, thought, et cetera. Because such persons are saying that what they did, what they do, is justified in Islam.”

Tahir Wyatt adds that many terrorists are driven by “political agendas, not religious ones” and are often “ignorant about basic Islamic tenets.” The extremists still often convince others to join them. Wyatt and other mainstream Muslims recognize the importance of reaching out to young people who may be influenced by extremism.

“I think that these impressionable youth need to be reached by credible Muslims who have knowledge of the roots of extremism and can prove through classical Islamic teachings, that terrorism really is un-Islamic,” he said.

Imam Islam talked about how hard it can be to “deprogram” a young Muslim when he or she sees someone on the Internet that looks like a scholar promoting violence — especially when that “scholar” says that all other Muslims are telling lies.

“It takes a lot of patience,” he said. But the important thing is that he was there to do the deprogramming, and that would be impossible if someone was written off as not a “real Muslim” as soon as they had extremist views.

Of course, this approach just trades one problem for another. Instead of the logical fallacy, it becomes an argument over interpretation of religious texts — which can be used to justify anything. But, by acknowledging that extremists are indeed Muslim, the lines of communication might remain open, perhaps leading to less violence in the future.

November 27, 2014
Pakistani Bollywood Star Veena Malik Gets 26 Years in Jail For the "Terrorism" of Blasphemy
Next Post