If you walk past the Cherokee County Courthouse in Texas, it might be hard to miss this Nativity scene they have up right now: 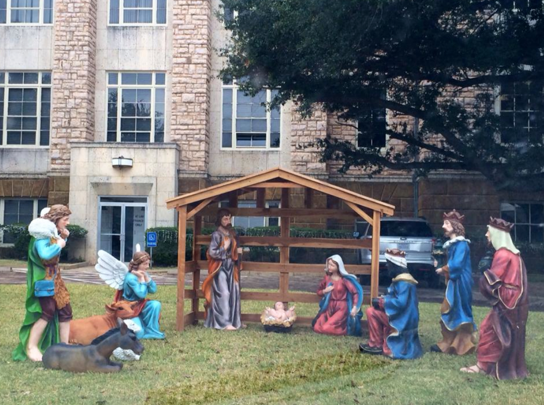 If that’s allowed, surely a Humanist display would be allowed, too, right?

That’s what Daniel Ross, a local resident, wanted to find out, so he sent county officials an email making that request. Last week, he got his response from Commissioner Katherine Pinotti (who claimed she was not speaking as a county official, even though she was using her county email address):

December 23rd is merely a date selected by your orgnaization [sic] to make a political statement of your choice not to celebrate traditional Christian beliefs. Perhaps you should consider choosing another time of the year to demonstrate your secular support instead of attempting to infiltrate the Christmas holiday with a singular purpose to destroy and denegrate [sic] the beliefs of others. Try to live and let live.

Another email, including that conversation, sent by Ross went unreturned.

Yesterday, the American Humanist Association’s Appignani Humanist Legal Center sent a letter to county officials saying that the existence of the Christian display — without allowing any other displays — amounted to a constitutional violation:

The purpose of this letter is to advise you that the elaborate County courthouse display amounts to a monument to Christianity, and is therefore a clear violation of the Establishment Clause. We hereby demand that the County promptly remove it and provide us with written assurances that no similar display will be erected in the future. Our organization will pursue the matter through litigation in federal court if it does not.

… any claim by the government that it established a “public forum” for private speech is belied by the actual facts in this case. However, if it is the County’s claim that this is an “open forum,” then we demand that you allow Mr. Ross to erect a Humanist holiday display adjacent to the crèche.

Maybe the Satanic Temple should send them a letter, too, just to add to the mix. How hard is it for government leaders to understand they can’t promote one belief system over all others? December doesn’t belong to Christians even if they’re celebrating a holiday.

November 25, 2014
Christkindlmarket in Downtown Chicago Now Includes an Atheist Banner and a Giant Scarlet "A"
Next Post