For years, people flocked to Salvation Healing Ministry, pastor Victor Kanyari‘s church in Nairobi, and paid for the privilege — because the charismatic preacher healed the sick where doctors supposedly stood powerless.

Visitors saw with their own eyes how Kanyari and his helpers would make believers’ feet ooze blood with the gentlest of touches — which, they concluded, was surely a miracle. What they didn’t know was that the “blood” was really potassium permanganate, a grey powder that is a known oxidizing agent. The substance turns water a purplish red, so when Kanyari, his hands rubbed in potassium permanganate, washed the feet of an AIDS patient or a person with another serious affliction, he created instant fake blood that colored the water and beaded on the dupe’s skin.

To make the trick even more wondrous, he also placed needles lengthwise between his fingers, stealthily releasing them into the portable basin as he performed his Jesus magic, to make it seem that they had emerged from the victim’s skin as the result of his healing touch.

The illusion was strengthened by the testimony of paid shills. They would joyfully exclaim that just weeks earlier, AIDS had almost reduced them to walking skeletons, but that Brother Kanyari and the benevolence of a loving God had returned them to perfect health.

An investigative Kenyan TV program called Inside Story finally exposed the devout trickster and his crew. Start at 9:54 and watch for five or six minutes to see exactly how the so-called miracles were staged. 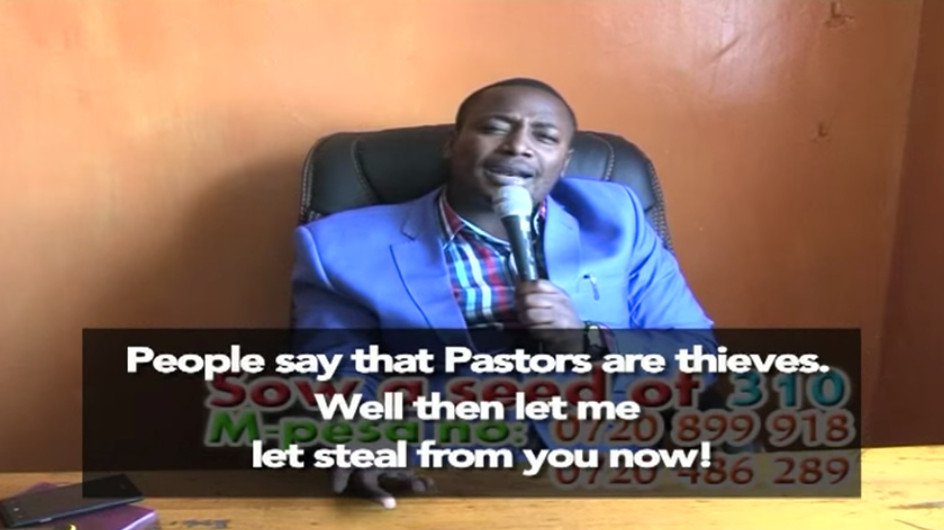 The program revealed elaborate playacting by Mr. Kanyari and a group of devoted followers who helped perpetuate his claims by making false testimonies and staging “healings” in front of the congregation.

Such cases are not new — but the blowback this time is significant. Many Kenyans are outraged that Kanyari easily exploited widespread trust in church institutions and targeted the poor, many of whom are desperate and willing to pay small fees to get the aid Kanyari promised. The case has spurred a bid for new regulation, with the attorney general announcing last week an indefinite ban on registering any new churches. And for mainstream Christians, it raises concerns that faith in the honesty of most religious outlets will decline. …

[F]or many Kenyans, despite the occasional incident of fraudulent behavior, churches remain in high esteem — unlike government, media, and unions.

Commented Oliver Kisaka Simiyu, the deputy general secretary of the National Council of Churches of Kenya:

Ah yes, Kenyans should trust only bona fide clergymen, right? Too bad that their ilk comprises Catholic leaders who falsely tell women not to get tetanus vaccinations because they’ll become infertile; Anglican priests who bed the women in their flock; Episcopalian clergy who impregnate nuns; Evangelicals caught stealing babies; priests who hire hitmen to dispose of religious rivals; and so on.

Exemplars of genuine godliness, all.

November 24, 2014
Evangelical Leader Wants to Recruit 1,000 Pastors Into Politics Because There Aren't Enough Christians in Office Yet
Next Post