“I’m Not Gay No More” Guy Releases Musical Versions of his Statement… and Gets Sued By His Church November 24, 2014 Hemant Mehta

Earlier this month, Andrew Caldwell became a viral sensation online when he got up on stage at the Church of God in Christ’s 107th Holy Convocation in St. Louis and declared himself free from homosexuality with the statement “I’m not gay no more!” 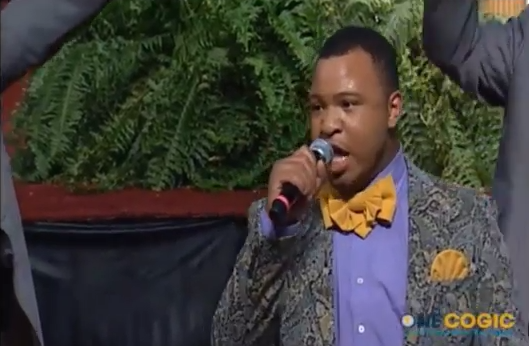 He received $100 for magically turning straight. I can only assume he bought more bow ties.

Now, Caldwell is milking his celebrity for all its worth, taking his infamous line and turning it into three iTunes singles. There are the Gospel remix, instrumental, and karaoke versions.

I repeat: karaoke. Just in case you want to say the line yourself, I guess.

According to TMZ, the church is suing Caldwell over the songs:

A church honcho says they’re ordering him to stop hawking the song partly because they own the audio, but also because they feel Andrew is making a mockery of the service … and that’s hilarious.

But Andrew’s calling BS, telling TMZ he’s copyrighted the song … and says it’s his voice and only he — not even God — can claim ownership of it.

I take back the bow ties comment. Caldwell may end up giving that $100 to a lawyer.

November 23, 2014
What Do You Do if You Start Having Doubts About Religion?
Next Post

November 24, 2014 Evangelical Leader Wants to Recruit 1,000 Pastors Into Politics Because There Aren't Enough Christians in Office Yet
Browse Our Archives
What Are Your Thoughts?leave a comment