The results of a new survey released by the Public Religion Research Institute and the American Academy of Religion show that partisanship matters more than religion when it comes to the acceptance of climate change.

Case in point: It’s not the Unaffiliated (atheists, Agnostics, and those who believe in God but don’t use a religious label) who are most concerned about it. That distinction belongs to Hispanic Catholics (who also tend to vote Democrat), with Black Protestants not too far behind. 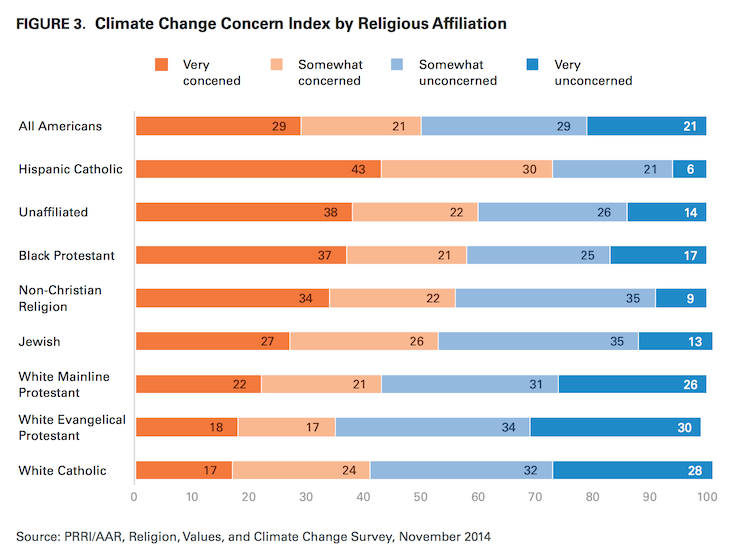 “There is a stronger correlation between partisanship here than among many religious variables,” [PRRI President Robert] Jones said. “If I didn’t tell you what the question is, and you just saw the data, you’d think I was talking about the midterm elections.”

Does everyone understand that climate change is a major reason for many of the natural disasters we’ve seen in recent years? In general, yes, but many people think they’re also a sign of the biblical “End Times.” These people also think Left Behind is a documentary.

Whatever you want to say about those green bars, let’s agree the orange ones should be non-existent. But when even 29% of the Unaffiliated believe natural disasters are evidence of some impending literal apocalypse, you know we have a problem. I’m also curious who these people are who think the disasters are signs of both climate change and End Times theology… (Pick a side, people! Stop trying to conflate the two.)

Speaking of which, the same survey also asked respondents whether there was a conflict between science and religious beliefs (in general and their own). No shocker there: The majority of almost every group (save white mainline Protestants) believe the magisteria are at odds with each other — the blue bars are hovering over 50% in nearly every case. 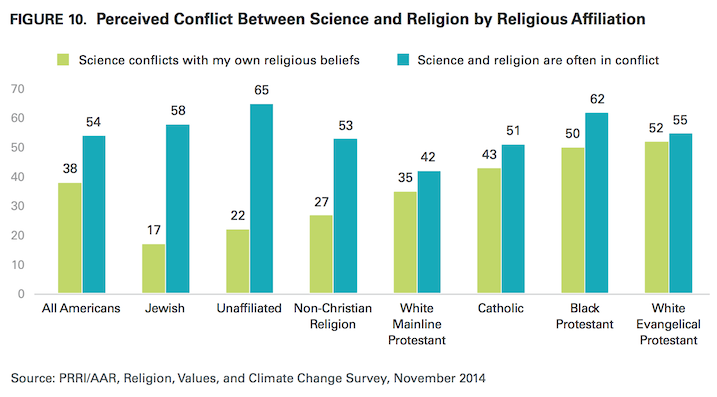 It’s interesting to note that all those green bars are lower than the blue counterparts. While is like saying science and religion may be in conflict… but I found a way to reconcile the two, at least a little bit.

It’s refreshing to see those blue bars, though, since it suggests the more we hammer home scientific values and principles — at least wherever the gap is — the easier it’ll be to get people to shed their faith.

Still, we should all be concerned that many religious people don’t see climate change as a problem — and the survey says they’re not talking about the issue in church very much:

Laurie Zoloth, president of the Academy, said she was concerned that so many Americans were skeptical about scientific research on climate change.

“While there is a growing consensus among scientists about the urgency of addressing climate change, this landmark survey shows that many in faith communities have not yet heard or understood that message,” she said.

November 21, 2014
How Dare You Honor Traditions Other Than Mine?!
Next Post