How Dare You Honor Traditions Other Than Mine?! November 21, 2014 Hemant Mehta

How Dare You Honor Traditions Other Than Mine?!

This multicultural holiday sweater, including symbols from Christianity, Hinduism, Islam, and Sikhism (not to mention some non-theistic philosophies), will appease everyone! 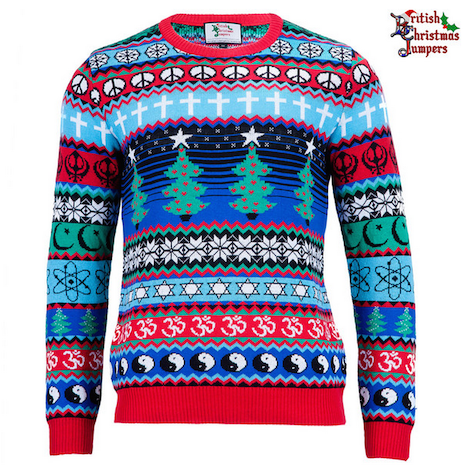 Unless you’re the Daily Mail, in which case this jumper is just a sign of political correctness run amok:

Over the years, political correctness has slowly eroded the the outlandish displays of festive cheer that occur around Christmas time.

Numerous offices have banned decorations over concerns that it would make certain parts of the population feel left out and others have stopped Christmas booze raffles in case it offends people of religious faiths where alcohol and gambling are forbidden.

So, with the huge growth sales of festive sweaters over the last few years, it was only a matter of time before someone invented the ‘Multicultural Christmas Jumper.’

The only way it would cause offense is if anyone actually wore it.